Having just dropped her heart-wrenchingly honest new track, “More Than A Friend”, GIRLI explained: “I wrote this song about crushing hard on a girl who didn’t want me back… Falling for your friend can happen to anyone, but I think it’s a feeling that is particularly poignant to queer people; falling for a friend who perhaps isn’t the same sexual orientation as you and not being able to express those feelings for fear of being judged or losing that friendship. It’s sticky”.

Although the live music industry has been put on pause over the past year, GIRLI still cut her teeth performing with the likes of Ashnikko, Declan McKenna, and performing at festivals such as Reading, Latitude, All Points East and more. Fans will be pleased to hear she’s back live, playing London’s historic Bush Hall on 9th July to celebrate 20 years of the venue.

Notion caught up with GIRLI to hear about her musical firsts – from feeling starstruck meeting Charli XCX to being inspired by M.I.A and more.

I wrote a song when I was 8 years old about this boy in my class I liked called “Does He Like Me”. I remember one of the lyrics went “does he like me or does he wanna throw me on the pile?” which I can only assume meant rubbish pile?? It was super un-feminist of me and I remember singing it to my mum and her being very concerned.

“So You Think You Can Fuck With Me Do Ya” was the first song I ever officially released as GIRLI. I clearly gave way less fucks back then.

I was 14 and standing in the second row of a Tegan and Sara gig, which I had queued for 10 hours outside the venue before just to be closer to the stage. I saw them singing songs and making everyone in the room feel happy and understood and I thought “I wanna do that”.

When I got dropped by my first record label, lost half my friends and my ex broke up with me in the same month I wanted to throw my phone in a bin and run away and never come back.

‘SPICE’ by Spice Girls. The album actually came out in 1996 and I was born in 1997 but my parents had it and we jammed to it all through my childhood so I think technically it was always my CD.

First gig and festival you went to?

My first gig was Arctic Monkeys. My first festival was Reading Fest 2014.

I met Charli XCX when I was 16 after one of her London shows and was pretty in awe.

I played trumpet in high school which is so random. So I had my little trumpet case and I’d bring my trumpet with me when I had practise. But the first instrument I bought with my own money that I’d earned myself was an electro-acoustic Ibanez guitar, which I still have. I bought it when I was 15 so I could start playing open mics.

First time you fell in love with music?

I remember hearing M.I.A’s “Bucky Done Gun” and being gobsmacked at how cool it was.

First song that pops into your head right now?

Watch the music video for "More Than A Friend" below: 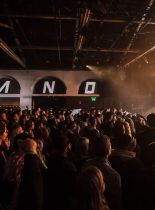