Tom Ashbrook has been building his own classically-inflected sound for years, energised by the emotional power that he felt when listening to film soundtracks. It’s filtered into a cinematic sensibility that’s stretched across multiple albums and several intriguing collaborations.

It’s that collaborative spirit which has especially filtered into his new EP, ‘Ko:da’. It’s largely built around revisiting the track “Klass” from Ashbrook’s 2020 album ‘Sensibus’, now influenced by the differing approaches of new collaborators. In one, Ashbrook brings on board director Marcell Lobenwein to shoot a filmic version of the track titled “MISSUXO”, which creates a melancholic and thoughtful soundscape reflective of a vivid emotional state.

On this track, Ashbrook says, “I wanted to create a conclusion to ‘Klass’ as a concept based around the beautiful film MISSUXO shot by Marcell Lobenwein. Revealing it as an acronym and true meaning…”Knowing Love And Still Suffering’. This EP extends and elaborates the thematic material and i’d like to say thank you to Robot Koch and Greta Svabo Bech who has connected with the piece and made it their own. T”.

Elsewhere, on the “Foam and Sand Rework”, Ashbrook brings on board Foam and Sand and Robot Koch to revisit the song once more, while his own “Acoustic” version transforms the track with the help of differing instrumentals. The EP also includes the delicate and pensive track “tu: orbit”, where Ashbrook’s tranquil instruments are charged by the rich emotions of vocals by Greta Svabo Bach.

‘ko:da’ is a vivid and imaginative work of self-reconsideration reflective of an artist unwilling to let ideas go unexamined – who is restlessly curious to probe his own assumptions and find new ways of thinking about his art.

Listen to the EP below: 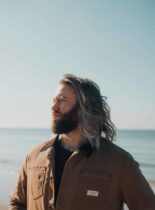 Neo-classical artist Tom Ashbrook returns with a recording from his latest album ‘Solitudes’.