Louis Culture’s catalogue divulges his own reality, candidly communicating the everyday experiences of a South Londoner over bouncing 808s and undulating synths. Growing up in Battersea through the rise of groups like So Solid Crew and the Tammy Girl fashion era, Louis was entrenched with an unflinching sense of candour; a sagacity which was passed down to him through the older kids from that same area. Something which now imparts itself into all aspects of his career.

In the months preceding his forthcoming EP ‘When Life Presents Obstacle’ (due November 25th), Louis has dropped four steely singles, each of which promises a reinvigorated canvas for his musical prowess and chronicling of life’s ups and downs. “Twiss” and “Can’t Deny It” are packed with 808 kicks via Pullen’s production; “Grime” trials sounds of funk and house; and “7AM” featuring Bawo and YAMA//SATO released over the summer. If the latter doesn’t appear in your end-of-year Spotify roundups for ‘Most Played Track’, something’s wrong with the algorithm.

The disposition of ‘When Life Presents Obstacle’ reflects on south London’s locale, as well as the artist’s current state of being as he turns a page on his next chapter. As we speak on this new era, the 24-year-old reveals he released music in his teen years under a different moniker, a more autobiographical body of work. But now he feels it’s the right time to share his story in a fresh light, explaining: “in the six years I’ve been making music I have to acknowledge that there are things that people maybe don’t know about me; things I’ve left in the gaps”. 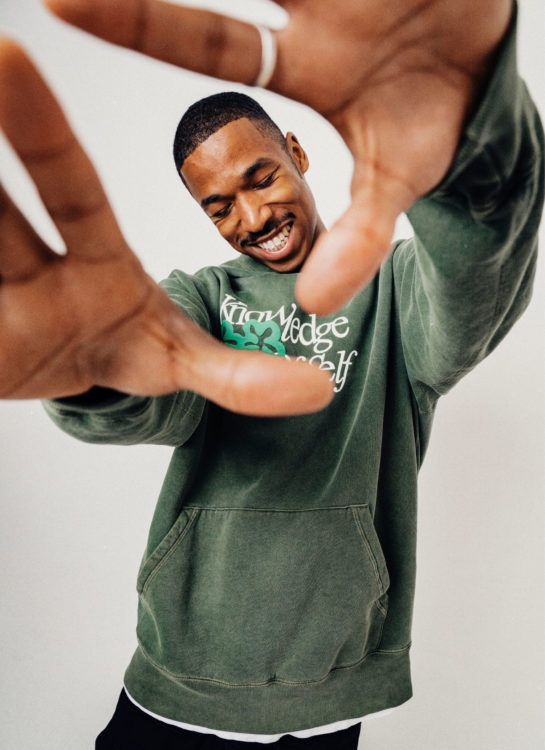 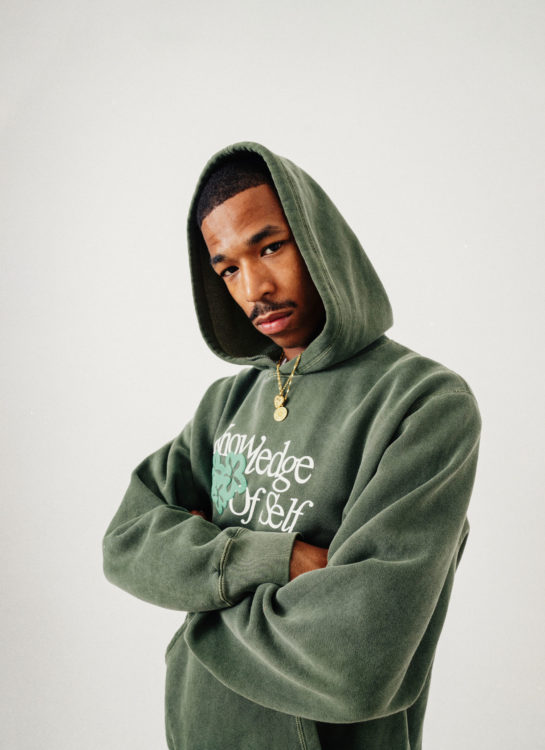 The variety of texture throughout earlier dewy, electronic debut EP ‘Smile Soundsystem’, brandished his capabilities and potential; since then, he has become a master of his own musical flare. Whether Louis is crafting tracks as a representation of conflicting emotions or those simply designed to dance to – in the crib or in the club – he’s generating the spark you need, day and night.

Amongst his avant-garde crew, Elevation Meditation, made up of p-rallel, Lord Apex, Finn Foxell and Xav, Culture has joined a group of kindred minds which mirror his authentic approach to creativity. “I guess we’re all outsiders in our environment”, he describes. “With Apex being a bit older than me and seeing the things he’s achieved by himself – he didn’t have a team or manager for time and he managed to go to other countries, build fan bases, and his music spread”. Together, they create songs that illuminate the way we grow into, and around, the people we choose to keep close.

Within his own legacy, Louis parallels the impact of previous pioneers to our current music culture. “You can take groups like Outkast, Pharrel, N.E.R.D – all these people showed me that, not only is Black music so much bigger than hip-hop but there’s also no reason why we can’t exist in more spaces. There should never be a limit.” We caught up with Louis ahead of his EP release, discussing his new track, “Grime”, process and more. 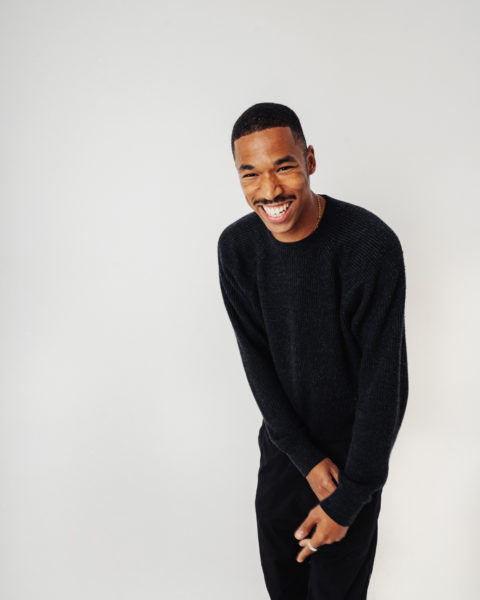 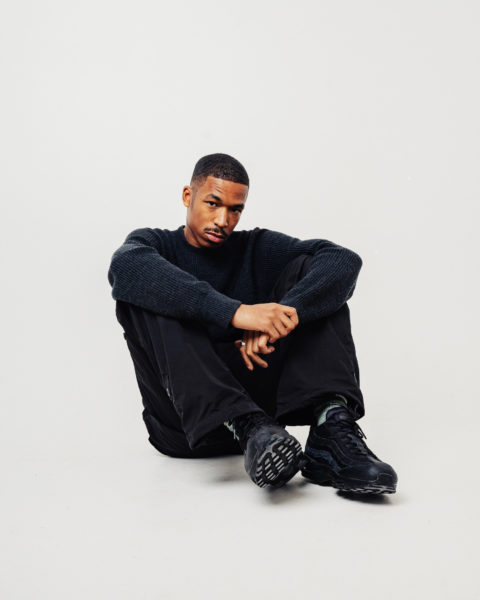 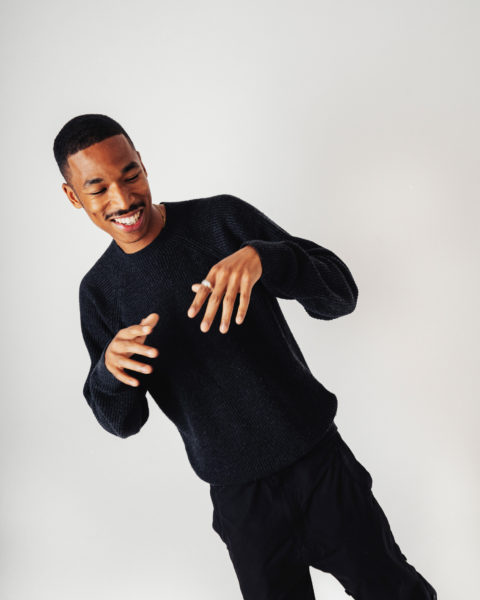 Your new track “Grime” just dropped, and is something you put together a couple of years ago. What made you feel like now was the right time?

I was working with this producer called Karma Kid who’s worked on some incredible stuff like NAYANA IZ, he’s a really talented guy. It came about in our first session, but I had the chorus for ages, maybe even two or three years, but I sat on it for so long because I couldn’t find the right words. I didn’t feel like I had the right thing to say and it wasn’t coming as naturally as I thought.

Is it your normal process to start building a track from the chorus or hook?

I think choruses are definitely easier to write than verses, but it depends on the feel of the song as well; because sometimes I might just be rapping or venting. With songs like “Naked” or “Being Me”, I remember specifically having a lot to say and knowing exactly how I was going to approach the song and who I want to sing on whichever part.

When I first started hearing your stuff back in 2016, you primarily stood out as a narrator of stories. Is there something from your past which has influenced this storytelling ability?

That’s crazy to think about on a deeper level but absolutely, I think the first thing that comes to mind is someone like Nas. If you listen to ‘Illmatic’, which was a very influential album for a lot of people, you can hear someone that’s standing in the middle of their community and telling people everything that’s going on around them. In a way, I feel like that’s what I was doing, almost as though I was standing in the middle of Battersea and telling people what I saw, things that I’ve experienced. And also, aside from when I met Apex and those guys, I didn’t really grow up with rappers, so there’s a responsibility of telling other people’s stories and making them feel seen.

You once described Part 2 as a tribute to South London. It’s an area packed with creative talent. Would you say it’s impacted the way you approach your career at all?

Definitely, it’s quite a hard thing to summarise, but it’s a few things that make it that way. Again, growing up in Battersea there are groups like So Solid Crew, that come to mind first. That was the first time you could really see British rappers on a different scale – working on big-budget videos and in general, showing London and blocks off in such a cinematic way that we hadn’t seen before. So when I look at my career now, how far I’ve come and the type of person I’ve grown into, I know that my actions back then and growing up in South is what helped build the character and skills I have today. 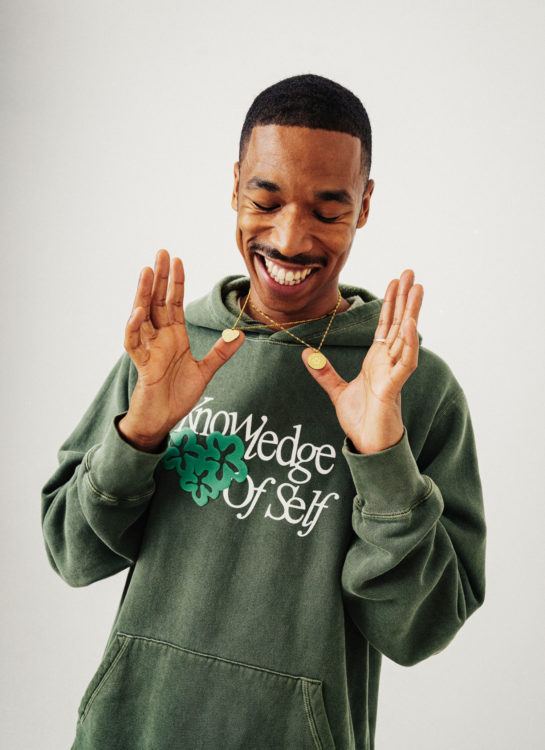 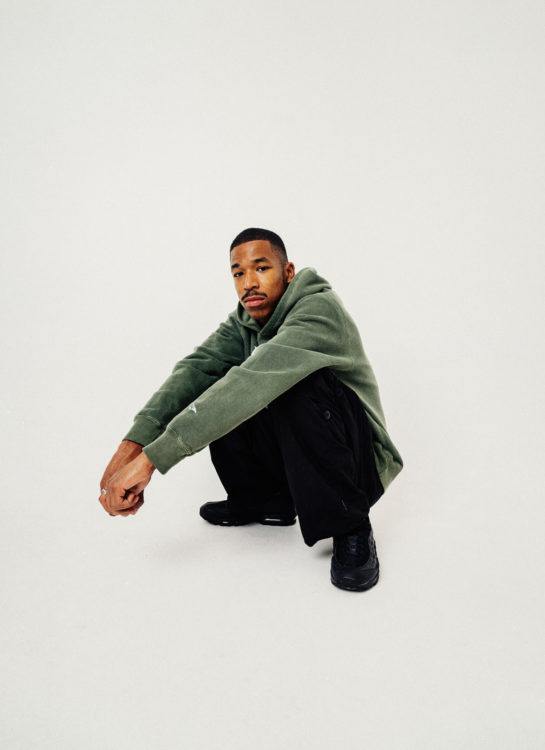 How has being a part of the Elevation Meditation crew boosted your confidence with music in those moments when you might not be sure what next step to take?

Each time I get a question about the crew I feel more and more pride. I spoke to Apex just a couple of days ago and he’s in Brazil for a campaign. We’ve all grown together and come from similar backgrounds – we came from ends, and we weren’t necessarily like everyone else. I guess we’re all outsiders in our environments. It’s especially inspiring when it’s people you’ve grown up with.

Taking productions into your own hands at such a young age speaks volumes to the longevity of your career, and learning new crafts is a constant part of growth. What’s something you’re trying to better yourself in right now?

I need to learn the piano. I haven’t actually started yet, but I know that once I get to grips with it, it’s over. It’s actually over. Because I’ve always produced, I’m a beatmaker or when you put me in a room of producers, I can produce but I’ll curate it as well. That’s maybe a strength that will unlock a lot of things and hopefully allow me to get more ideas out.

You’ve had four singles come out ahead of your EP now and the vulnerability felt more prevalent in this recent work. Would you say that’s a reflection of a new chapter in your life?

Definitely. On ‘Smile Soundsystem’ it was very much about electronic music, making music for the club and just sound design. I dropped a project when I was a kid under a different name and that was very autobiographical. But in the Louis Culture era or chapter there hasn’t been that kind of project, so I feel like I’m having to catch up with myself and inform people – this is who I am, this is where I’m coming from and this is how I feel. It’s getting to a more well-rounded place as a reflection of what my life is and what life is like as a whole. There are always ups and downs.

Are you in a place where your old sound just feels like the past to you? Like “don’t f up Louis”—what do you hear in that today?

I was doing “don’t f up” in rehearsal the other day and I think I just hear someone that had maybe not stepped out as much. I just hear my youth. As with any form of art, whether that’s a painting where you going to use certain paints or techniques, you might look at your old work and realise how you do things differently now. It’s constant growth, seeing the improvements and being able to evaluate that. It’s good to see that I’m still able to stay true to myself. 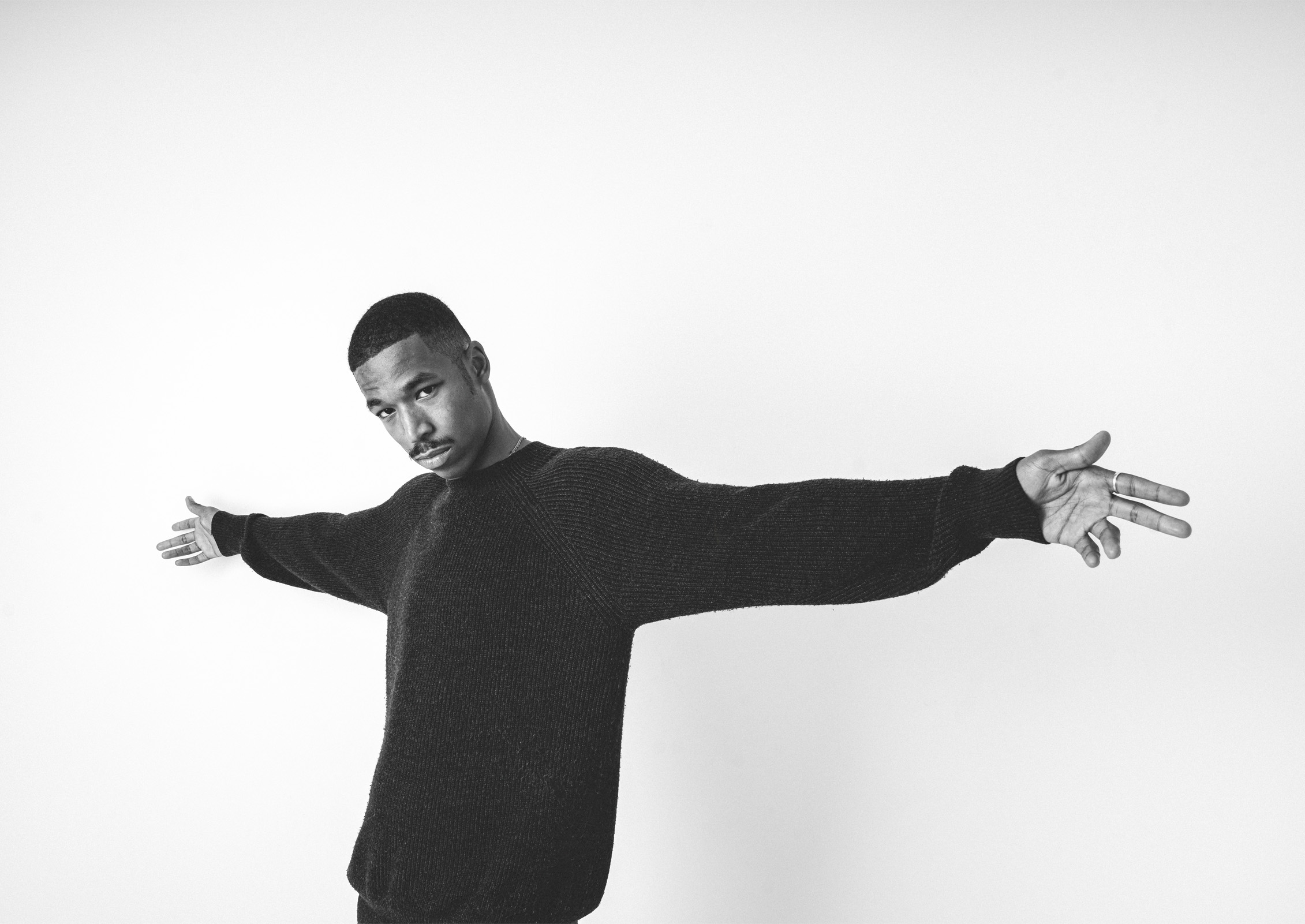 With your new EP ‘When Life Presents Obstacle’, what do you want listeners to take away that they might’ve not known about you before?

I’ll leave it open to interpretation, I don’t know if there’s anything specific really. The biggest learning curve for any artist is that you can never control the reaction. You can only but do your best, put it out there and just let it be.

This is perhaps a complex debate but as far as how people have reacted to your music in the past, do you ever get tired of the fetishisation of authenticity and being ‘underground’?

I don’t really pay attention to that. I come from the school of Kanye, so that’s kind of how I approach music. He’s an artist who’s existed in a pop space, existed in a rap space, and brought the two together sonically. He might get Chris Martin on a rap song or Elton John and Kid Cudi, or Bon Iver and Beyoncé. Also, you can take groups like Outkast, Pharrell, N.E.R.D – all these people showed me that, not only is Black music so much bigger than hip-hop, but there’s also no reason why we can’t exist in more spaces. There should never be a limit. There should never be one single person trying to tell you what you should be doing or try and tell you ‘you’re selling out’. I’m open to it all, that’s what I strive for.

A lot of what we have touched on here speaks to your growth as well and how the music and legacy can reflect on that. What does having a legacy mean to you?

First and foremost, I’m just grateful to be creating one. It’s forever humbling that people even want to listen to what I have to say and the fact that it’s gone this far. Of course, I believe in myself, and I believe in my ideas, but it’s still something I’m very thankful for. I’m confident it will impact people, keep spreading, and obviously, a bonus would be that it inspires people to be creative as well and face their problems. 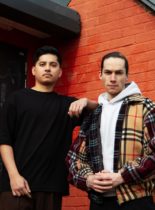 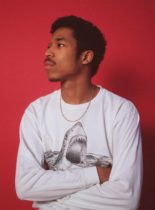