With the release of her powerfully honest new album ‘Lessons In Love’, we lay in the roses with the enigmatic Sinead Harnett.

Sinead Harnett, the half-Thai and half-Irish songstress, has been somewhat quietly burning over the last few years leading up to this very moment. Sinead’s highly anticipated album ‘Lessons In Love’ has finally been released from her heart and into the world.

Following a run-up of extremely successful singles and tracks since Sinead burst onto the scene, with features on records by Rudimental, Disclosure, Kaytranada, Snakehips and more helped solidify her reputation as one of the UK’s most impressive vocal talents. Now, with the release of ‘Lessons In Love’ already garnering huge support it’s clear that Sinead has cemented herself as not just an incredibly amazing vocalist, but also as a songwriter that can craft timeless and intrinsically delicate songs from her very soul.

‘Lessons In Love’ plays as a diary from a modern woman navigating the trials and tribulations of the modern world. Sinead’s journey from her hardships that she experienced within herself, with her lover and the relationships around her is a testament to the power of love in itself. It came to a surprise that the main lesson Sinead actually learnt about love was, in fact, the love of the self, and with that fruitful love of one’s own flaws can provide the strongest foundation to all of the love around her.

Across the twelve uniquely stunning and emotive tracks, Sinead takes you gently by the hand on this journey with her as she tries to unpack love in all of its many forms. What’s so refreshing about Sinead Harnett is her ability to exude a sense of warmth, even if it’s just you listening to her from your earphones. It’s a certain kind of warmth that makes you feel like she is singing to you, and you alone, as if she was a long-time friend that you haven’t seen in a while, and she was telling you her tales.

It’s a powerful thing to have a young female such as Sinead, promoting a message of self-love that is in fact intertwined between romantic love. Throughout the ages, love has often been akin to devoting yourself entirely to another soul, ultimately leading to the downfall of many. We’ve all been there before – a mindset that is entirely hopeless and in fact wreckless to believe that if you’re not giving yourself completely over to another human then you are doing love wrong. With Sinead, she’s able to love another soul entirely, in the good times and the bad, whilst learning to love herself and give her heart what it needs to be full at the same time. That is the lesson in love – to love another whist giving that same love to yourself. Sinead sums this perfectly by revealing “The more I love, the more I learn about its magic, its importance and its lessons”, explains Sinead. “In every song, there is a lesson. But most importantly, in every song, there is love.”

As the summertime comes to an end, we pluck daisies with Sinead to talk about the power of love, the good and the bad, the magical healing power of laughter and what’s next for the girl with the glimmering smile and the heart of gold. Catch Sinead playing at the o2 Shepherd’s Bush – more info on the magical night can be found here SineadHarnett.co.uk. 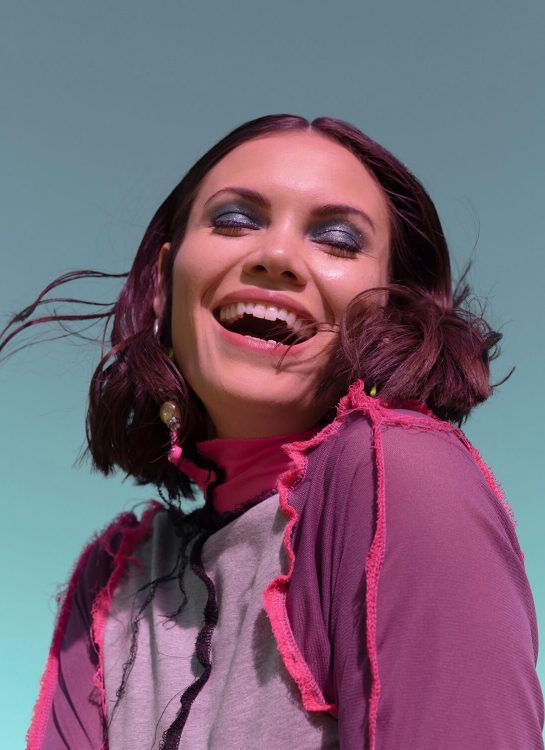 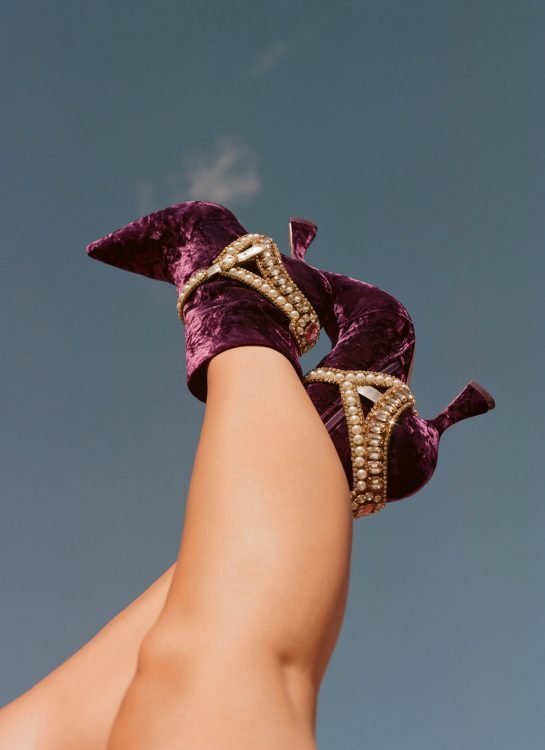 Sinead’s journey into music and becoming the artist she is today originated from humble beginnings. Coming from a family that believed in the power of education, Sinead tells me “music just really began as an escape for me, you know it started off as just a hobby that I loved doing to take my mind off of the pressures of school and everything else around me. I wasn’t really allowed out a lot as a teen growing up in North London” Sinead continues, “So, diving into music was my way of rebelling I guess. When I got to college at 16, they had talent shows every year, and I had been obsessing over them and finally started performing in them. That was when I first started writing my own music as well – I met this guy who went to a studio which existed to help kids in London pursue creative careers, and it just developed from there.”

Hearing about Sinead’s origins, specifically, the era she grew up in – the power of the R&B girl bands can be found within the DNA of her music, but Sinead tells me that “I remember finding two Coldplay albums when I was around 12, and it really opened me up to this emotive and melancholy music, which really struck something within me.” She recalls that this quickly led her into The Verve and Damien Rice to name a few. “There was something about it,” Sinead begins, “Perhaps because I had a little bit more of a reclusive childhood, that it really stood out to me and helped me recognise that I do have this sadder side to me that I wanted to explore.”

“Diving into music was my way of rebelling… I do have this sadder side to me that I wanted to explore.” 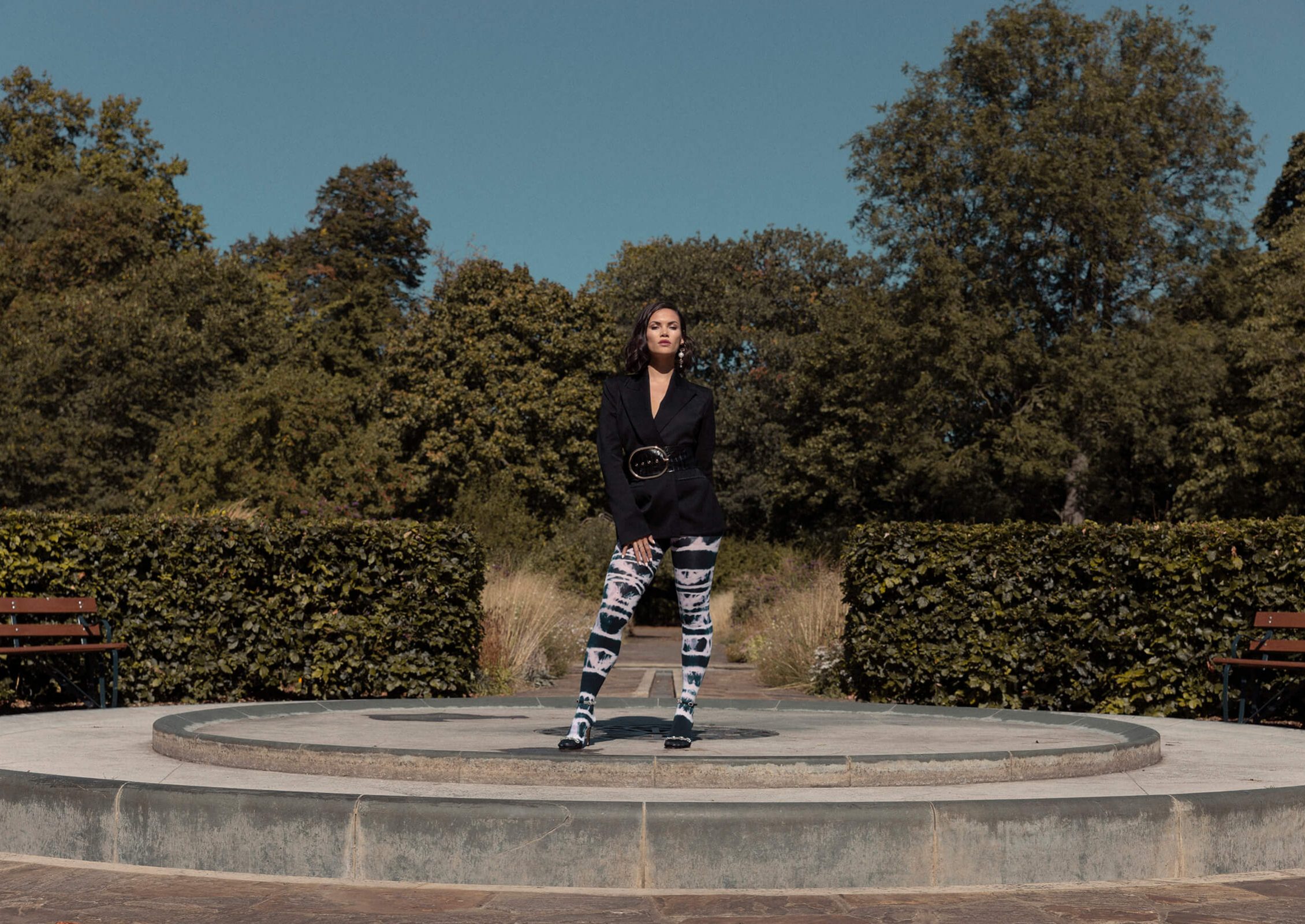 When I ask Sinead simply “how are you feeling having your body of work out in the world after a build-up?” She pauses and begins “It feels… it’s definitely emotional. Even talking about the early days with you just now has made me feel emotional about the younger Sinead – the younger me that felt very lost in the world and that I would never find my feet.” Sinead continues, “For so long my love of music felt like my little secret – the music I was writing and singing felt like it was only for me because I couldn’t really share it. I guess I didn’t feel like I would ever be confident enough to share it with the world.” With a happier tone to her voice, Sinead reveals, “It’s been a long road to get here, and now that my first album is out, after working in this industry for roughly eight years, has made me realise that no matter how long it takes, everyone’s path and journey is unique to them alone. To be honest, I feel like just hugging the younger me because it’s been so much work to get here, and I think you have to be obsessed with your art to continue to do it because there are so many hardships and bumps along the way that could throw anyone off.”

When I ask Sinead about the specific lessons she learned about love – assuming it would be about romantic love, Sinead surprises me and reveals “The biggest and best lesson I’ve learned throughout this journey, which I didn’t really realise, was that this album would become the lesson in loving myself, but it did.” Sinead continues, “Even six months prior to the album coming out, I was still figuring a lot of things out. I’ve been in a relationship for two years, which has had its hardships like any relationship does, but I figured out that I actually like who I am, and I that I back myself.” Sinead pauses, “Which is so refreshing as before I would get so lost within a relationship, but throughout the album, even in it’s saddest parts, I was actually letting those go and learning to accept myself”.

“The biggest and best lesson I’ve learned throughout this journey, which I didn’t really realise, was that this album would become the lesson in loving myself, but it did.” 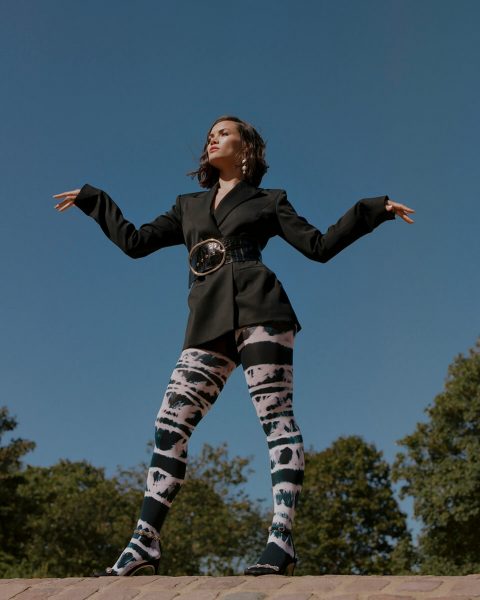 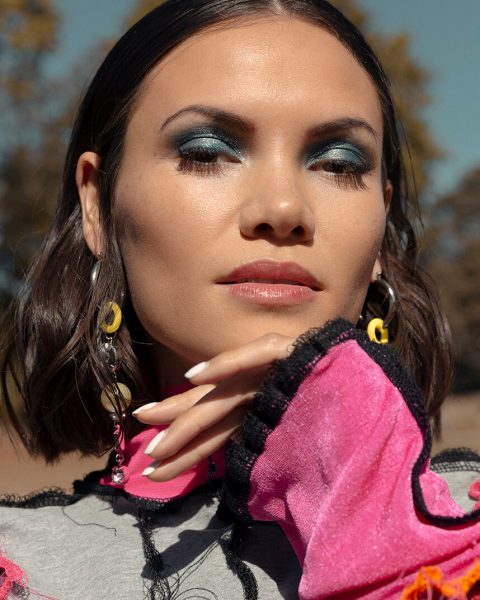 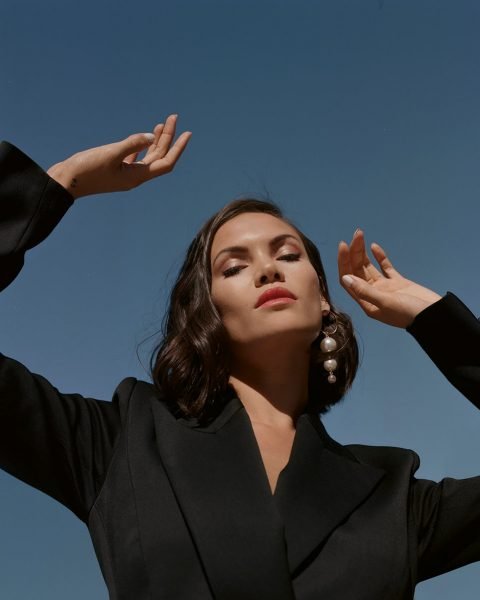 On her creative process, Sinead tells me “With a lot of songs I create, once it’s on paper and recorded that’s my way of letting it go. However, there will always be songs that will forever carry a piece of my heart in them and spark the feelings that inspired them.” Sinead continues, “some are plasters and some are healers.”

I notice that during our conversation we often drift back to the topic of self-love, and how that is an everchanging battle that we all continue to fight every day. Despite the sheer talent Sinead possesses, the kindness she exudes and her beauty, she reveals “I’ve always battled with this voice in my head – especially when I was younger, but even still to this day. When someone compliments me I don’t know what to do and it makes me almost uncomfortable because of that voice in my head.” When I ask what does she say to that voice to try and conquer it? She simply replies “I tell it to f**k off” as she laughs and I claim that’s some of the best advice you can give anyone. “It does take time though,” Sinead proclaims, “It’s a process – we are all going through it, and no one has mastered it.”

“There will always be songs that will forever carry a piece of my heart in them and spark the feelings that inspired them. Some are plasters, and some are healers.” 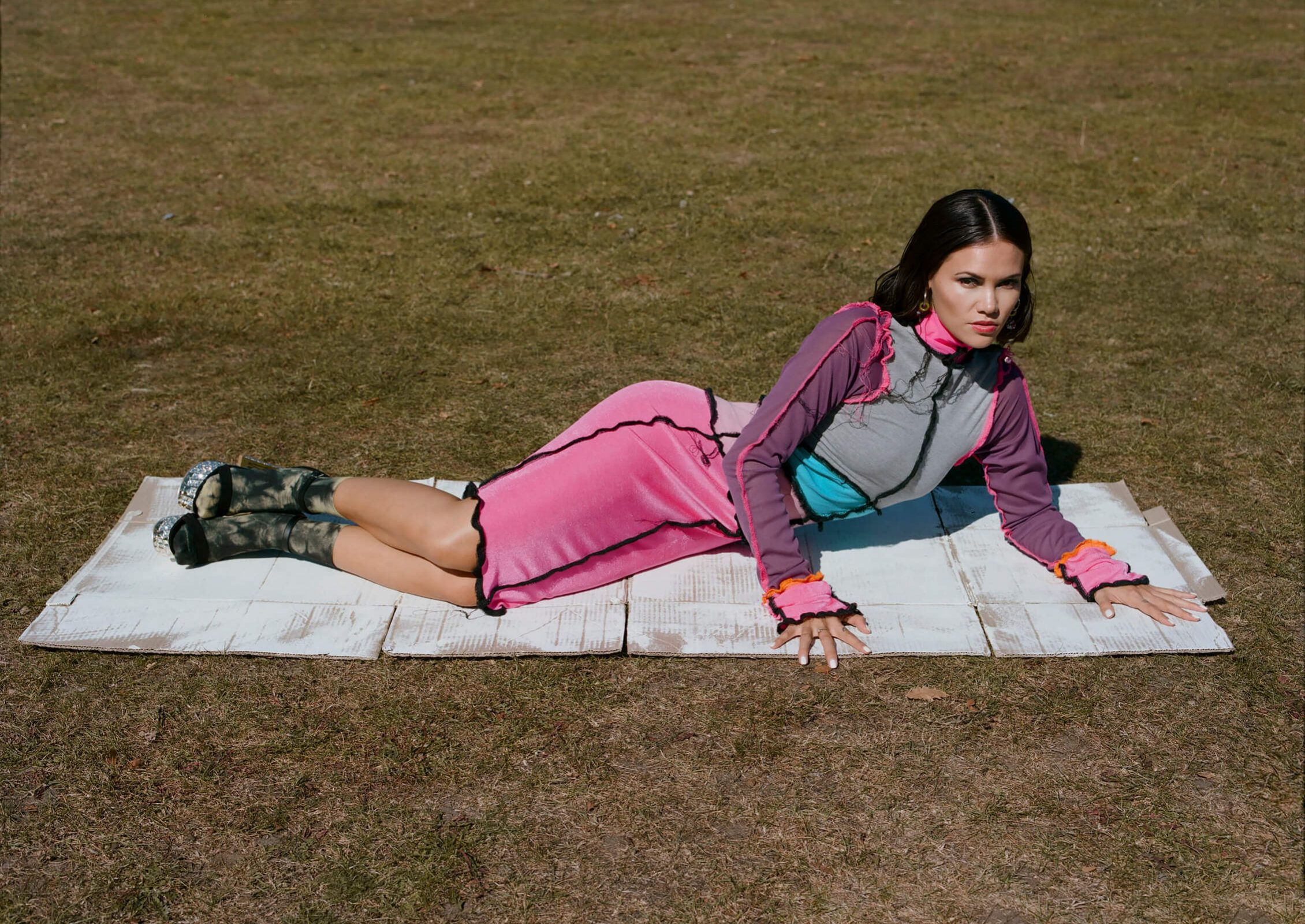 Despite ‘Lessons In Love’ just being realised, Sinead tells me ‘There’s been such a build-up and anticipation for the album coming out that I’m trying my best not to be scared of the unknowingness that follows. I’m writing as much as I can and already, I think I’ve got some contenders for album two.” It’s clear that Sinead is a grafter and always has been. Sinead tells me after I ask if she’s planning any time off “I don’t want to have huge gaps between work, I want to keep things moving because it’s what I love so much and I think all of us want to improve ourselves and our work – so that’s the plan.” Sinead laughs as I take it that it’s a no to the time off.

If you don’t know what to expect a Sinead Harnett concert, it can best be described as an incredibly intimate performance. With Sinead’s deeply raw lyricism and her strength lying within her vulnerability that shines out within each vocal note. You can expect to cry but you can also expect to laugh as Sinead reveals anecdotes around the songs she has crafted. It’s powerful how much Sinead lets the world into the inner workings of her heart, but that is truly her secret weapon. “For me,” Sinead begins, “the thing that makes me feel the most, which I think is what art is about, is when it comes from a tough place, but there’s healing involved.”

“Leading up to now”, Sinead begins, “I’ve had almost ten years worth of relationships to talk about – a lifetime of seeing people in my family deal with what they’re dealing with, but the biggest change in terms of my relationship with love is that I’ve gotten to a healthier place with it.” It’s clear that Sinead is an artist of the truest sense – analytical of the universe she has created within herself, but also able to take in the world around her and balance the two to create an understanding of herself with wisdom beyond her years. “I’ve learnt to love without bringing in past difficulties or unhealthy patterns with me which has taken a lot of work, and that’s the lesson really, putting the work in is entirely up to you, and that’s the lesson of the true healthy love.” 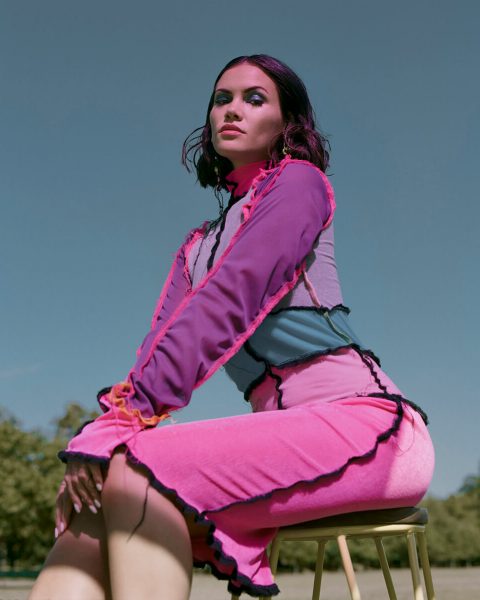 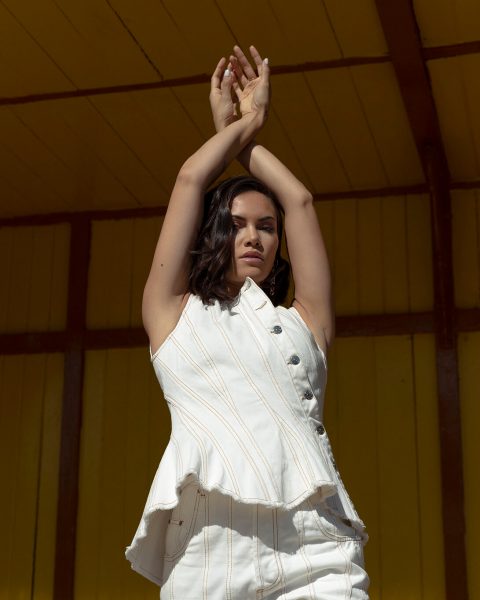 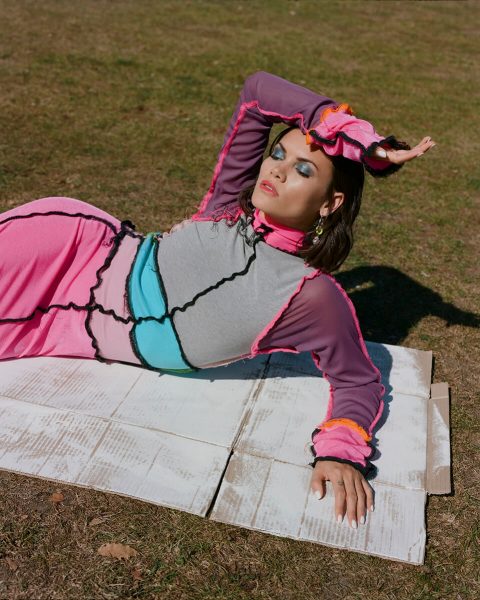 Check out the stunning visual for Sinead's 'All That You Are' single below. 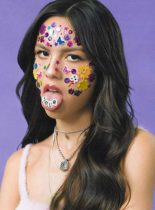 Catching Up With Sinéad Harnett 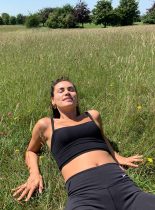 We catch up with our favourite romantic Sinéad Harnett amidst isolation to talk the journey of healing, finding light in the dark places and the power of slowing down. 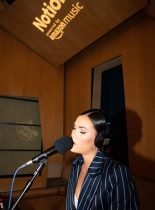 Havana Club drinks were pouring as we got into our feelings at the intimate listening party for Sinead Harnett's new album “Lessons In Love” in partnership with Metropolis Studios and Amazon Music.