Emerging onto the music scene back in her youth at Brighton Music College, Mimi Webb made her debut in 2020 with the hit single “Before I Go”, following up with earworm tracks “I’ll Break My Heart Again” and “Reasons”. Whilst the UK music scene is flooded with newbies, Mimi has been spending the pandemic-ridden past year honing her craft and slowly racking up millions of streams on her upbeat, emotional pop ballads.

Inspired by the likes of Amy Winehouse, Adele, and Sam Smith, Mimi has gone from picking up a guitar at 13 to signing her first management deal with Epic Records in 2019 after her internet demos gained the attention of many. Whilst she is still new to the music scene, Mimi has undeniably found her spark and is rising through the charts to make her stamp on the UK music scene. 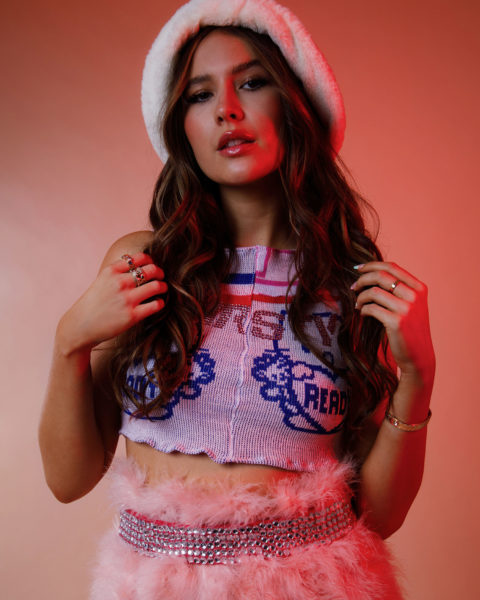 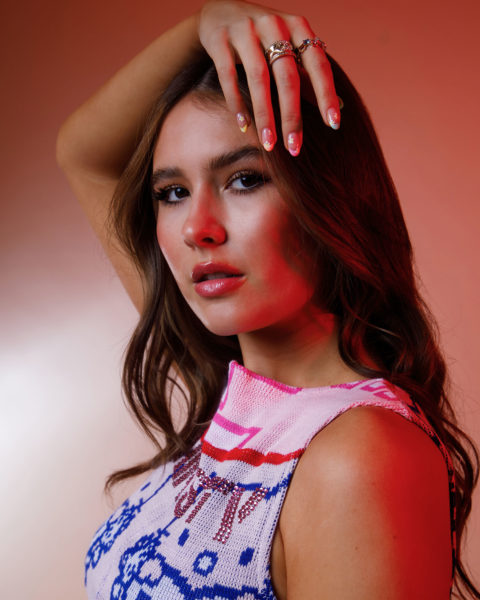 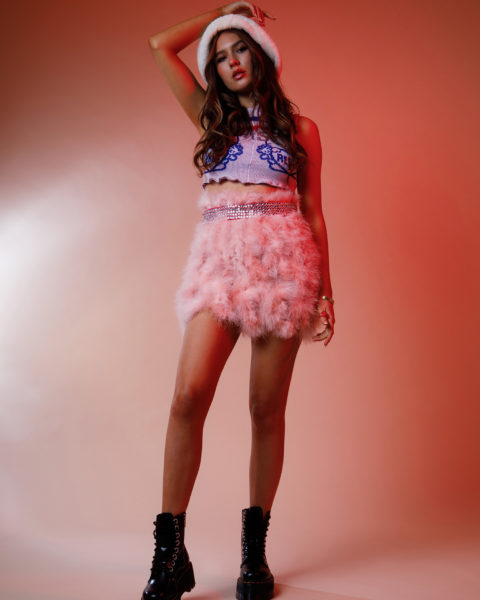 Although the past year has been a whirlwind, the 20-year-old’s journey into the music scene is one that can’t be re-written. From catching fire on TikTok as superstar Charli D’Amelio give her the thumbs up to her smash hit “Good Without” on the verge of becoming a top 10 single, Mimi Webb is driving in the fast lane as she establishes herself as a contestant for the future face of pop.

With such a breakthrough year, Mimi is now taking the momentum of 2020 into 2021 as she readies herself for the release of her debut EP and prepares for the excitement of live shows.

As the world re-opens, the bubbly and excited young artist might have achieved great things, but she’s only getting started. 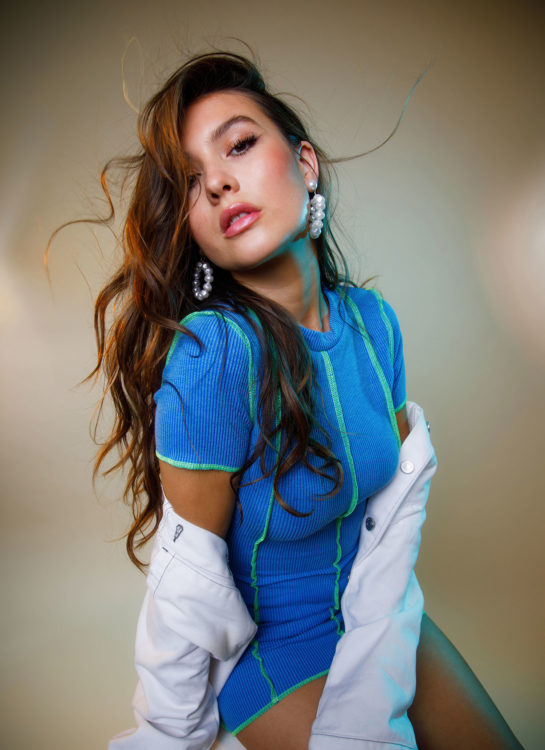 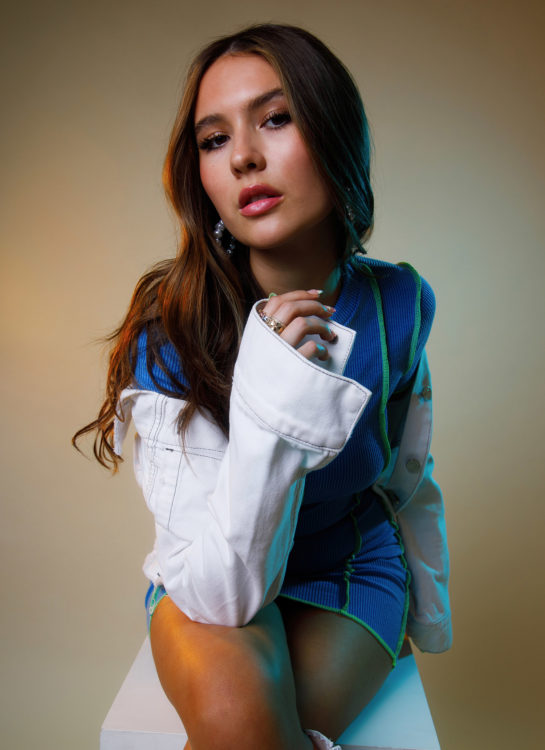 Firstly, let’s go straight into your latest single, “Good Without”, a bop that has really blown up these past weeks, which you totally deserve, but what is the overall story of the track and what were you hoping to achieve from it?

It’s about the past situation of going through a heartbreaking story. It was the first song of this year I’ve written. And there were things I hadn’t said that were left to say. So, it was that moment where I put it all on the table, laid it out and kind of moved on – it was closure to that chapter. It’s a very empowering moment and heartbreak of an emotional song. But there’s also that kind of power, like, I’m good without no more.

Now you released the music video last week for it, and it reminds me of the music video of “New Rules” by Dua Lipa and the concept of being with your girlfriends and self-love. But personally, what were those key influences when it came to producing the video?

I think influences for me were very much I wanted it to come across, a little bit of sass, there were a few little sassy eyes rolls I did, and it was nice to get into character with it. It was very girl power. And with the “Good Without” lyric in the chorus, it’s a very empowering moment where you realise you’re better without it. I wanted it to be, whatever happens, however bad things can get, you’ve always got your friends and your family to support you. And yes, it had that girly inspiration, all the colouring that we had on the video. Overall, it was inspired by the thought of not sitting there getting emotional, and we could turn the song into something with a video that’s a little bit more powerful instead of going the other way. Because there were two different routes, we could have taken with it. 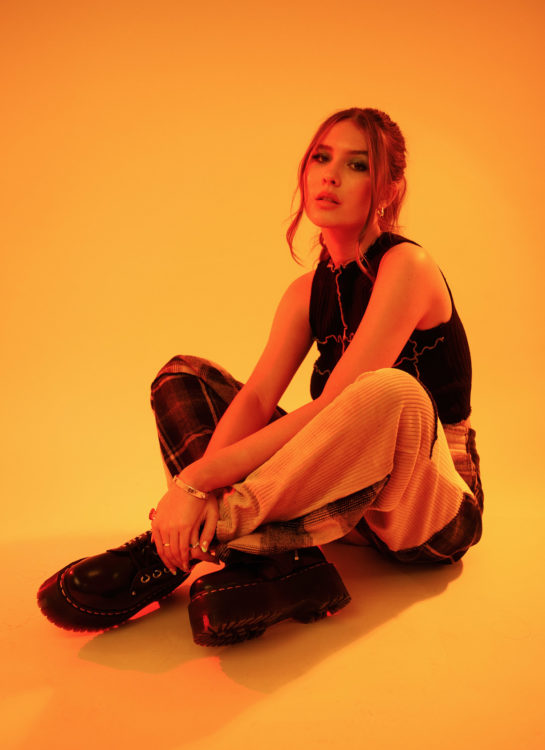 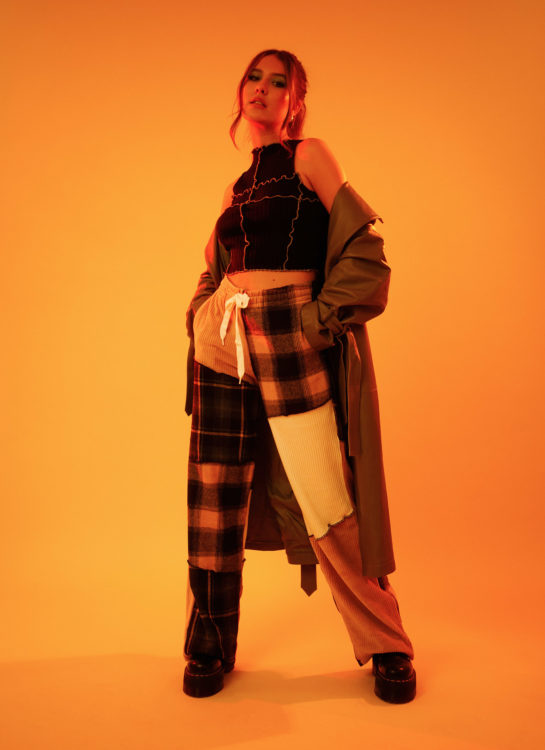 On the other hand, you only started releasing music last year (which I do not believe), but especially in a time of such chaos, did you ever think I might have to put music on pause or was it just full steam ahead?

I was not putting anything on pause. I remember at the start of the pandemic, I was like, right guys, I’m getting my setup, I’m learning how to do my vocals and how to record it all. We’re just not stopping like this because last year as well, 2020 was very much a year of right here we go. Let’s kick it all off. When we all went into the pandemic, I just thought to myself, no, not having it, I’m still going to do what I can do at home. It’s a very, full gun ahead, whatever the saying is full speed ahead – just very passionate about getting everything going. Every day I was up straight into work, I’ve got my little studio set up at home, and then it’s just back and forth.

At the time, still being new to the music scene and just finished Brighton Music College – was there any time you thought this could not go right, and as a rising artist within such a demanding music industry, how do you overcome those challenges?

There are those times where you end up getting a bit worried, releasing, the time span of how you’re going to do things and, there are so many amazing artists but, I think to believe in yourself and surround the whole thing with love and support for your peers and be happy and great – allowing the love of the industry in. I think that is where I learned, wow this is how it works. But there are definitely loads of times where you sit there and think, oh, and I think that happens with everyone, doesn’t it with anything you do. You’ve just got to be able to filter it all through and go with the things that make you feel good and happy.

As we speak about pursuing music, your first release was “Before I Go” – which caught the attention of millions. Did you ever see it going that far at, and what were those feelings running through your mind?

It’s so crazy to think back then, first of all, because it’s just nuts. I mean, I released that last year, April time and I remember that was my first music video. And I watched it yesterday because I’ve been quite unwell the last few days on my bed, looking through YouTube. It’s just crazy to think back to that. But “Before I Go” started kicking off on TikTok, and it was these influences and amazing people that were very into it. They were all wanting to do these videos and to see everyone’s reaction was insane. I couldn’t have wished for a better start for my first song. Then obviously, we went through to the next song, and every time I got better at knowing how to do it and what to do, and how to prepare for the release date – all that kind of stuff. “Before I Go” was the first lesson, and I’m grateful for the way that went. Because, like I said, being at the start of the pandemic, it was intense. At that point, I was thinking, Oh, God, what’s going to happen?

Following your debut, you also released “Reasons” and “I’ll Break My Heart Again” – both of which gained recognition from 4Music and Radio 1. What is it like to be recognised at such a big level nationally, and what is the next step you want to reach?

It’s crazy. I mean, I’ve been played on the radio, I’ve been getting DMS from people like you’re being played in Belgium right now, or you’re in Switzerland. It’s crazy because I’m like, wow, the fact I’m reaching all these different places is incredible for me. But I think the next chapter is very much releasing as much music as I can, people getting to know me, as much content I can do, and shows. Hopefully, a tour at some point, be able to get across to everyone and get everyone to see me in person. I think it’s going to be such an exciting time for that. And seeing that recognition, the way people react to that across the world is just incredible. 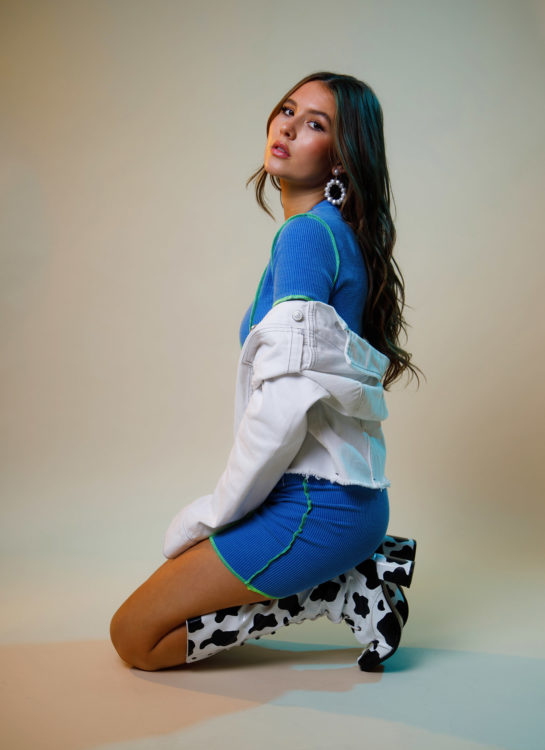 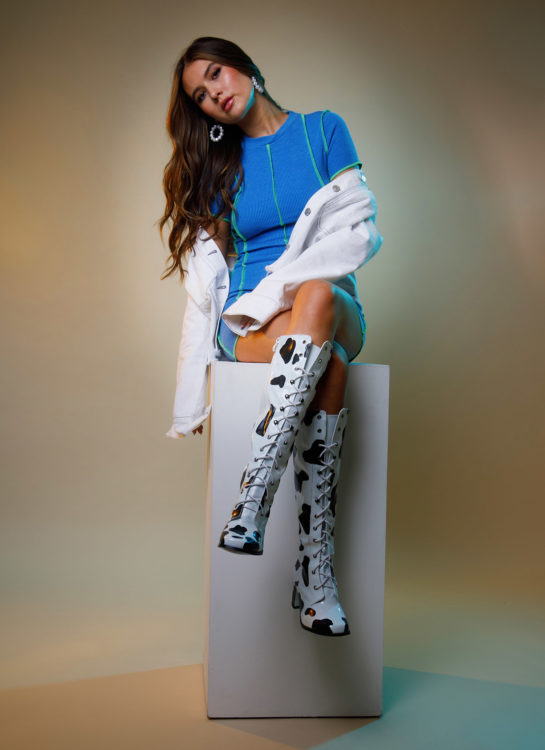 Elsewhere you are planning to do a couple of shows in London this September – both sold out in minutes – how excited are you to get back out performing, and what is the one thing you miss about shows?

I’m so so excited to get back into it. I haven’t been able to perform any of my songs yet because I started releasing them at the beginning of the pandemic. So being able to get into shows and start doing that is going to be incredible. And the fact that it sold out in a minute, I was like, how is this happening? I feel bad because I thought to myself, I want everyone to be there; I want everyone to have a chance to do it. So, yeah, we’ll definitely put some more dates in and figure it out. I think the most exciting part for me is to be able to see everyone’s faces when I’m performing the songs and everyone repeating the lyrics back to me.

Earlier on, we spoke about new music, and we hear you are preparing for your debut EP – what can fans expect from this first project of yours, and will we see anything different from you as an artist in terms of sounds and stories?

I think I’ve got a lot of music where it’s all based around the same kind of dynamic of that power ballad and lots of real live instrumentals. But, there’s going to be some songs where it’s more pop, and it’s maybe a little bit sassier. Though still, with that very emotional and big range as I like to redeliver the vocals. There will also be a few ones that are a bit darker and more emotional, where I’m staying low with my voice and getting those lyrics across. I’ve always said, expect the unexpected because, with the experience that’s been going on, you never know. It’s exciting to take it as you go and release each song as you do. 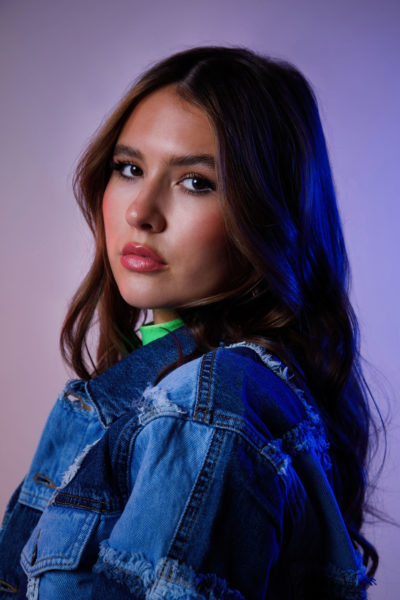 As an emerging artist who is continuously growing and exceeding expectations – do you believe there is pressure looming over you for this first project, and what advice would you give to someone who’s just starting music?

My advice would be organisation. I remember when I started, it’s quite a funny bit of advice. But when I was 16, I was at my music school. And that’s when I was like, I want to be an artist – this is where it starts for me. And every day, I write everything down – it might be the silliest little things, but I believe that if you feel on top of it, and you’re doing everything you can, that’s when you really can believe in yourself, and there’s hope there and, you feel like you’re moving towards something. I think if your brain feels you’re moving towards something, then that’s when it will happen. I’m such a believer in whatever you put in the universe; you’ll get back. Thinking about what you want to say, as an artist, what’s your message? What do you want to do for music? For me, I’ve always wanted to give people that goosebump feeling and connect with them and bring back that emotional music that sometimes can get hidden now and then, especially in the charts. Overall, I think it’s about what you want to say and fit in all the organisation as much as you can.

Finally, where do you see Mimi Webb going next?

I’ve always said that I want to reach for the stars, reach the top of it all. I want to take every opportunity I can get that comes my way. The more, the better. We’re going to be putting it up a few levels – that’s for sure.