Within just 10 minutes of speaking to Tiana Major9, it becomes evident that her success was not necessarily a conscious choice, but perhaps a gift from God – something predetermined. Each stage of her life quietly shifting her forward, step-by-step, into the position she is in today. “I’ve always sang, I’ve always wanted to perform,” the MOBO and Grammy-nominated singer tells Notion. “I’ve always written music.”

Growing up in Newham, east London, Tiana describes her upbringing as a sheltered one. “I wasn’t really allowed to do much other than school, church, performing arts school and then back again. That’s how it was growing up in the church,” she says. Although she may not have yet physically explored the wider world, her musical education was consistently being nurtured and developed, having known she wanted to be a singer from the age of five. At home, her mum played “a lot of Yolanda Adams, Donnie McClurkin, BeBe & CeCe [Winans],” while the church also honed her musical ear to harmonies and melodies as she joined the choir and was introduced to “Marvin Sapp, The Clark Sisters – all the gospel greats.” 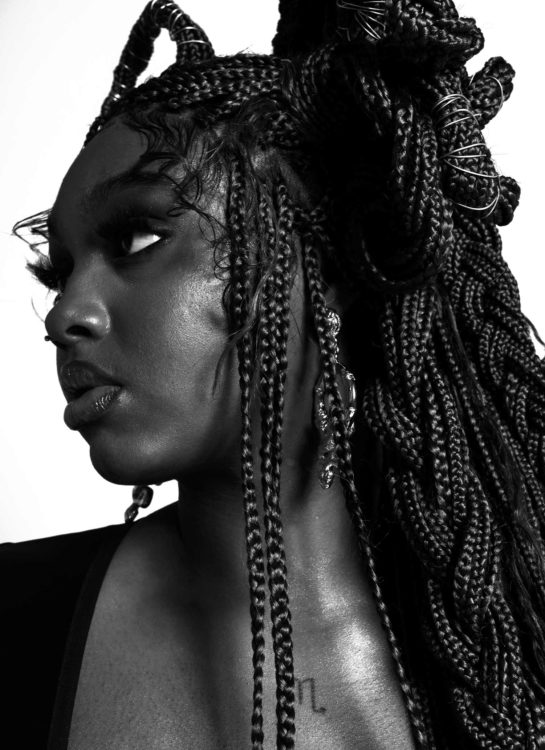 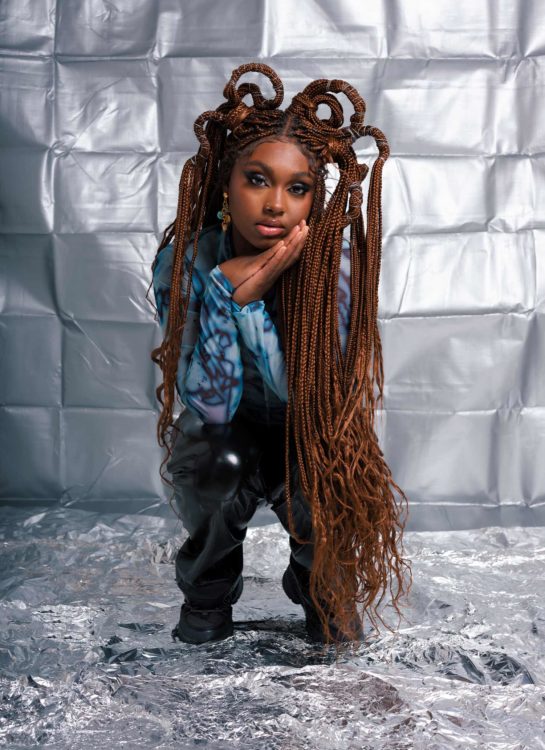 This sense of structure and artistic taste is not often seen in the modern soundscape of millennial UK artists, but Tiana feels this is what has been integral to moulding the foundations of the artist she is today. She emphasises that the church “helped me with being able to really train my ears,” which in turn has helped her find her own formula when it comes to making music. “I feel like I’m drawn to songs that really do something to me,” she says; “I only listen to songs that make me feel something. That’s the way I approach my music. You just have to be connected to something.” In addition to the church, and arguably more important, is the influence of her parents, who have been supportive of her career from the start.

Although she admits she is naturally a reserved and introverted character, that hasn’t stopped her from being championed not only amongst her fans, but also her peers in the industry on both sides of the Atlantic. Previous collaborations include “Rainfall”, which featured on Stormzy’s critically acclaimed number one album Heavy is the Head, and the Grammy-nominated “Collide” with J.Cole’s Dreamville label signees EARTHGANG. Just last month, she finished her run as a supporting act on the American leg of Jazmine Sullivan’s Heaux Tales tour – someone she cites as one of her favourite artists.

“I only listen to music that makes me feel something. That’s the way I approach my music.” 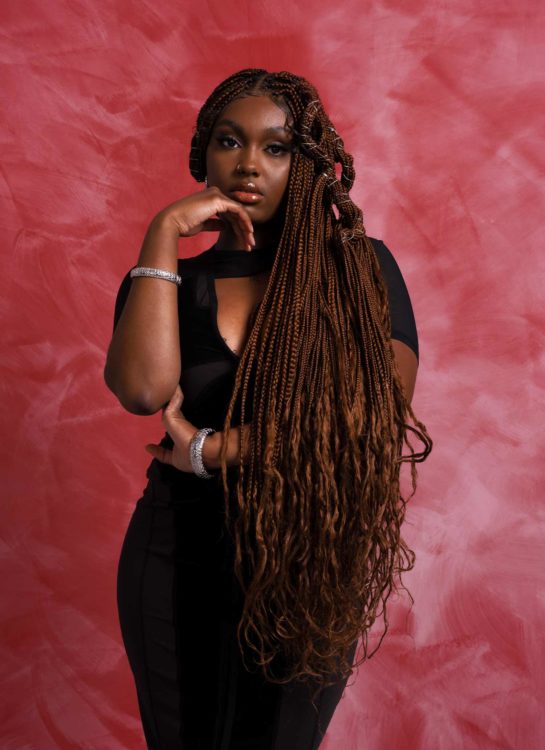 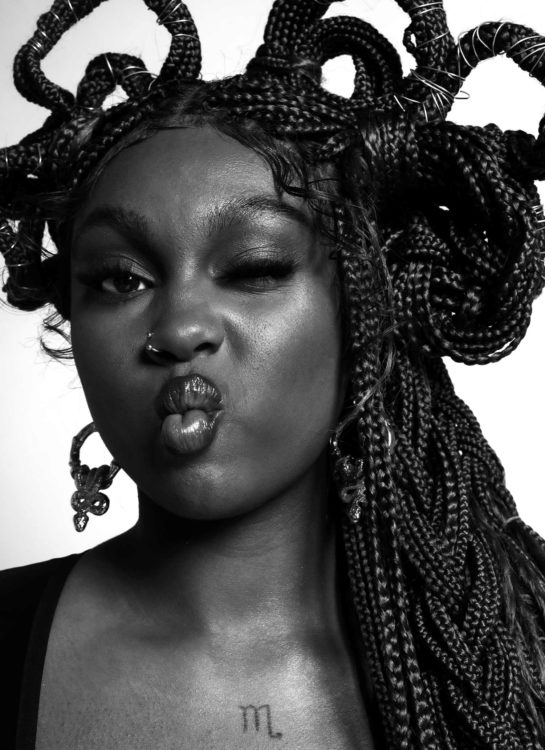 “Being able to see Jazmine every night was amazing. I was just listening in awe and also taking notes,” she says, her voice bursting with excitement. There’s been many a cautionary tale about meeting your idols, but it seems as though Tiana’s experience couldn’t have been more positive, soaking up every moment and making sure that when the time comes for a tour of her own, she is prepared and ready. As her career is steadily gaining momentum – perhaps faster than even her wildest dreams – Tiana frames the tour as “a really, really big affirmation,” and a period that has undoubtedly helped to provide her with a renewed confidence in her ability as she looks to navigate the road ahead.

By the time she released her debut EP Rehearsal @ NINE at the start of 2019, she was already a staple on the London gig circuit alongside names such as the now Brit Award-winning Little Simz and Kojey Radical, whose debut album narrowly missed out on the Top 10 in the UK charts earlier this year. But how does seeing the success of peers with whom she shared the early stages of her journey make her feel about her own? “I’m just very, very proud. Kojey [is] a creative genius. He’s evolved and developed and just continues to be the artist I expected him to develop into as a fan,” she begins, before reflecting deeper on her own initial come up almost half a decade ago. The growth, put simply, makes her feel great. “It’s also confirmation to just keep going and people will get it,” she adds, assured by her progress. “Just keep being yourself.”

The majority of the songs that made up Rehearsal @ NINE – a delicate amalgamation of jazz, soul and R&B –were already written (with contributions from her older brother), and were in fact frequently requested to be performed by her OG fans at shows. The success of the project and Tiana’s continued rise in the industry led to her signing a deal with Motown Records. But like many talented Black-British entertainers, after “doing the rounds,” she found herself across the pond in America having joined the US branch of the label. And she hasn’t looked back since. 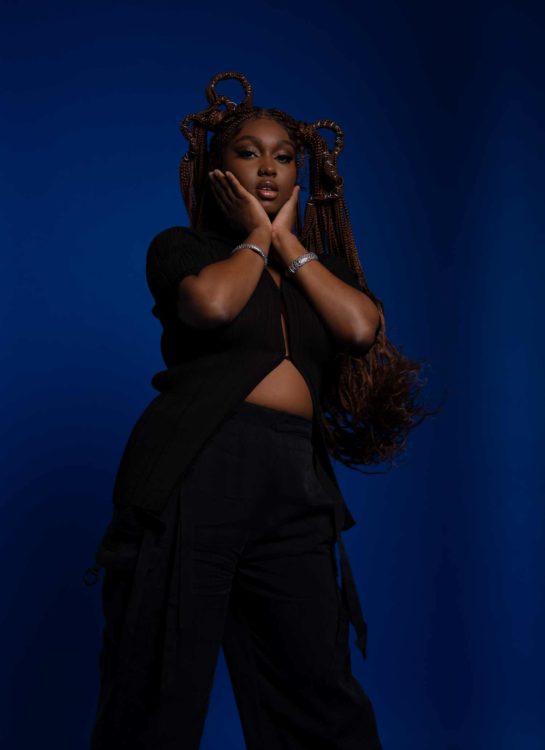 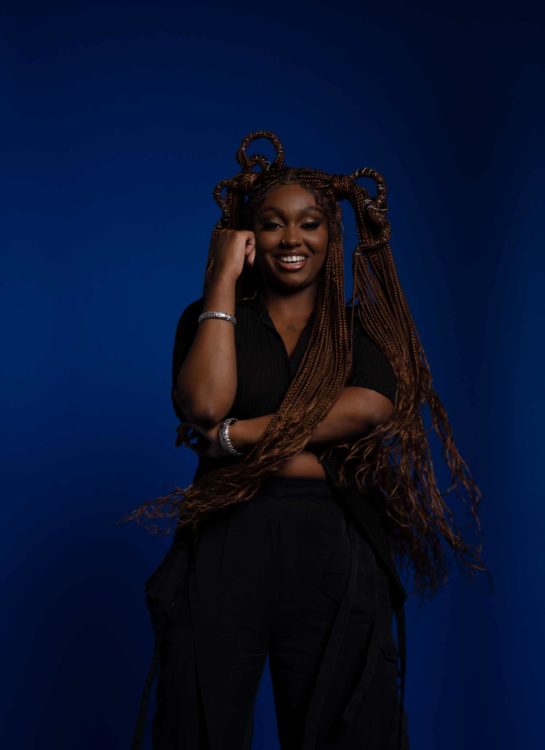 Tiana’s breakthrough career moment came later in 2019, with the release of the aforementioned “Collide” as part of the soundtrack for the culturally prominent film Queen & Slim, starring Daniel Kaluuya and Jodie Turner-Smith. “I didn’t anticipate, I could never, how well it was going to do,” she reflects. And do well it did, earning the artist her first Grammy nomination for Best R&B song and charting within the Top 10 of Billboard’s Adult R&B songs, helping to make it one of her biggest songs to date.

With her career momentum rapidly growing and her trajectory now rising to an international level, it seemed only right that a new project would soon be in the pipeline from the talented singer-songwriter. If Rehearsal @NINE was her in her sonic comfort zone, her sophomore project, At Sixes And Sevens – which dropped in 2020 – saw her begin to experiment more across the board. Songs like “Think About You” saw her tap into her Jamaican roots, while lyrically she was more personal and open with the themes she chose to explore – self-love and toxic relationships being just two examples.

The east Londoner has previously gone on record saying that her sophomore effort predominantly focused on who she was and who she wanted to be, something that she admits is still an ongoing process. “I’m in this weird space where I’m growing up very quickly, also on a platform, and people need answers. I know who I am as an artist; I know who I am at my core. It’s just relaying that to everybody and getting everybody on the same page, because there’s a lot of new people in my life and a lot of new people involved in my music career.” 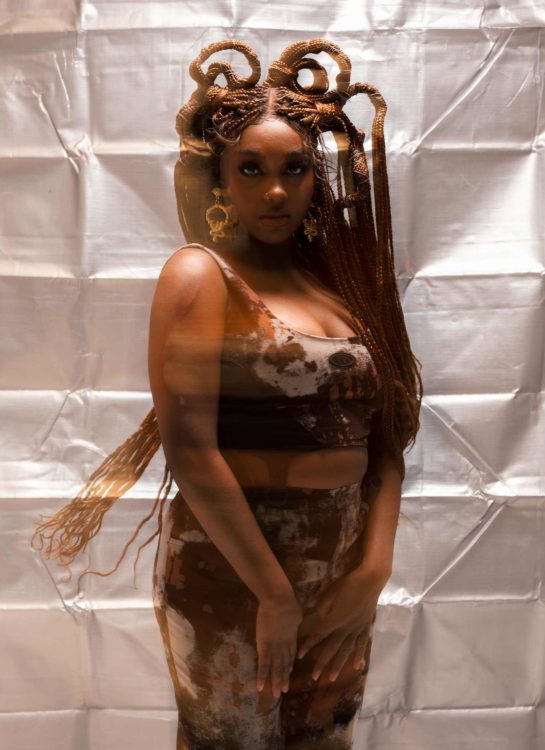 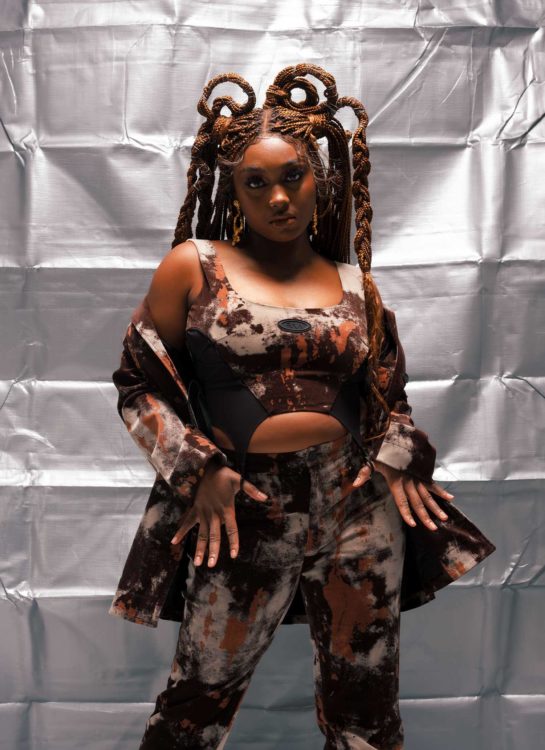 Like any new phase, this latest stage of her career has also come with a spell of adjustment and transition, with Tiana having to adapt on a personal level and step out of her comfort zone and her soft-spoken nature to ensure that other people aren’t in control of her destiny. “A lot of the artists that we know and love, they’re very assertive. I’m still working on becoming that kind of artist,” she says, highlighting how self-aware and eager to improve in all aspects of her life she is.

“I know I never want to lose Tiana at the core because I feel like I’m not being heard or I need to be seen. I understand the importance of that. It’s just making sure to tell people and make the vision clear to everybody else around me, because I already know” – which makes perfect sense when you consider that music has been her life since she was five years old.

Despite its challenges, Tiana has proved on multiple occasions that she’s not averse to change. She’s often been categorised as an artist in the realm of R&B, jazz and neo-soul, when the truth is that she probably sits somewhere in-between them all. She’s incorporated other genres into her sound and has expressed a desire to explore more, from K-pop to country and rock, which may come as a surprise to some. When asked about what excites her about new genres, she explains: “I think it’s a way to constantly recreate yourself and express yourself, to reach different crowds and different audiences,” her appreciation for how far she’s come not diminishing her desire to touch as many people as possible through her music. But she also emphasises the importance of having fun: “Sometimes music gets really serious and you feel like you have to make a song or a sound that everybody recognises and loves you for.” Ultimately though, when she zones out the noise of others’ expectations, Tiana is someone who “always wants to develop, always wants to grow, always wants to experiment.” She is someone who always wants to open herself up to new experiences as she tries to be the best possible version of herself. 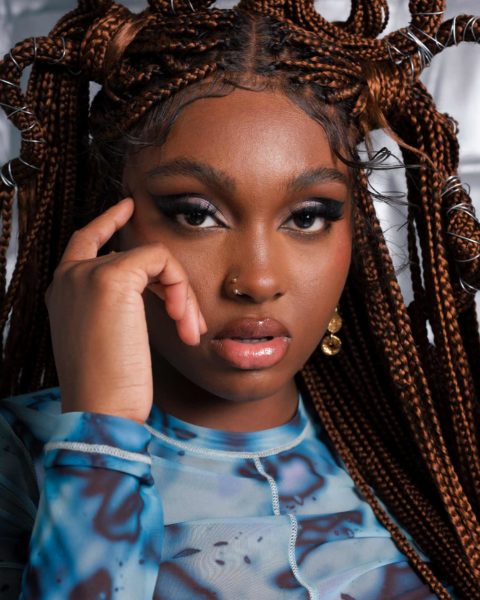 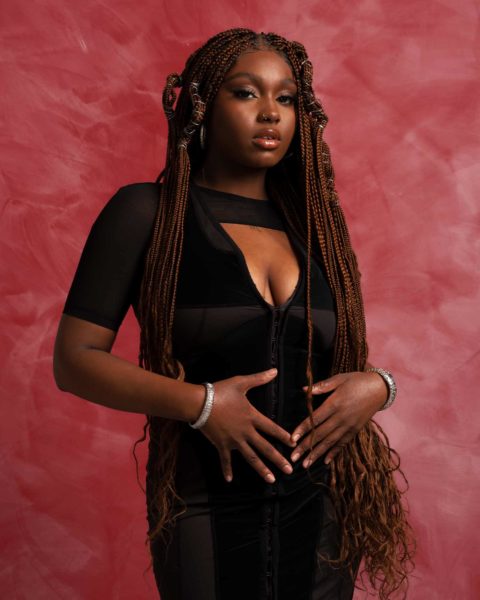 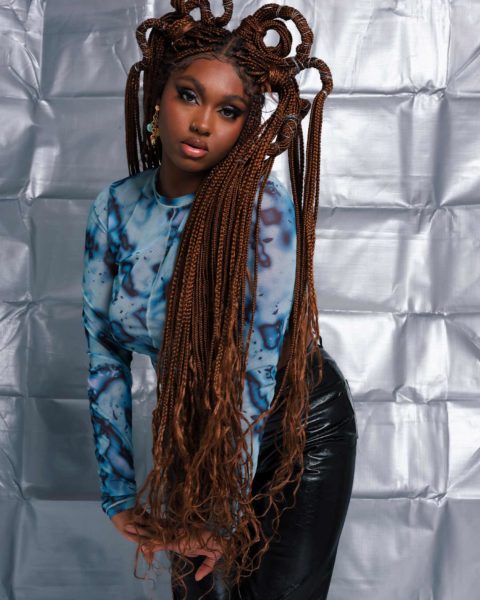 The next stage of her musical development will be her biggest to date: her debut album. It’s a process that she admits is taking longer than expected, “but you only get one chance to do your debut album.” Having been in a lot of sessions and writing songs that she would be more likely to give to other artists than release herself, Tiana reveals that she’s refined her process to be as purposeful as possible. “Working with the people I want to work with,” she explains. “I have a list, an album journal, where I’ve written down names of people that I wanted to work with, songs, concepts. I’ve been very intentional about it all.”

The journey to this point has been long, enduring and rewarding. It’s a path that started at the age of five and still hasn’t reached its peak over two decades later. So what advice would a 26-year-old Tiana Major9 have for her younger self, having experienced the things she has up to this point? “I would say keep on speaking the things that you want into existence. Keep saying them outwardly, keep telling people,” she decides. “You will absolutely get them – and it’ll be quite scary when you do! Just keep writing, keep singing. Keep telling people what you’re going to do, because you will do it.” And with God guiding her every step, you wouldn’t bet against it. 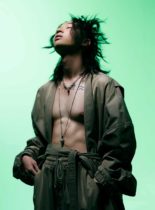