More than solely a DJ, MK has spread his talents into many mediums from producing to remixing. After carefully curating the way the younger generation views dance music, MK will go down in history for his part in shaping the culture.

With a strong Detroit background in musical taste, MK effortlessly transitions from house to techno to hip-hop and R&B without you even noticing the smooth change. With an incredible roster of collaborations so far – Becky Hill, Milly Pye and Anabel Englund to name a few. With the promise of more incredible collaborations on the way, it’s clear MK has only just begun to leave his mark on the industry.

MK’s discography includes over 500 titles, with his tracks ranging from his dancefloor hits to his underground secret weapons. MK will play at The Warehouse Project on the 11th of October in Manchester. Until then, dig into his top 10Trax below!

"This tune is such a party starter and I love seeing people really get into it at the break."

"There For You" by Gorgon City & MK

"This is my new single with Gorgon City that just released last week. Loved working on this one with the guys and happy it’s out before summer’s over!"

"Searching For Someone" by Eli Brown

"From the start, this track is a heater with an infectious bassline and it kills in every set."

"Even though it’s my tune, I can’t stop wearing this remix out. It has such a chill summer vibe and KC Lights absolutely smashed it."

"Anabel’s vocals are perfect for partying poolside and I loved working on this one with Nightlapse so I’ve kept it in rotation all summer."

"This one is such a heavy club track with a great build that always gets people moving."

"When I was remixing this one, I knew it would be key summer tune and Camila’s vocals make it such a fun, upbeat vibe."

"On top of it being an incredible collab from two of my favorite DJ’s, it’s become a ‘must play’ for me all season."

"A sweaty club tune that’s made for those hot, underground nights. This one gets a great reaction every single time."

"This song has been a staple in sets all summer. KC Lights made a track perfect for warm weather and club nights." 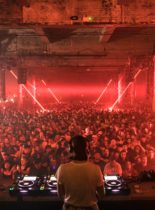 The iconic Warehouse Project in Manchester is offering up chances to see Megan Thee Stallion, Rudimental, Disclosure, and more in their 2021 line up.