30 of years of Work: DJ Premier on rap and the art of making records

We speak to producer, mentor and hip-hop icon DJ Premier about hip-hop, the universe, and everything.

DJ Premier is at the very core of hip hop’s history. J Dilla, Madlib, Kanye, Nas, Jay-Z, Biggie, Rakim, every iconic artist you can name has been influenced by his style or put in work over one of his beats. Even Christina Aguilera owes a chunk of her success to Preemo. His style is so pioneering in fact that he’s wildly considered to be the first hip hop producer to use a jazz sample in one of his beats. Think about that for a second and then think about all the rap music you know and imagine it without jazz samples. Weird, huh?

The man’s never slowed down either, 28 years since the first record bearing his name (Gang Starr’s No More Mr Nice Guy) landed in stores DJ Premier remains at the centre of the rap world. In the seven years since Guru’s death alone, Preemo has got behind the boards for Mac Miller, The Game, Joey Bada$$, Disclosure, Dr. Dre, and Miguel to name just a few.

Throughout all the changes in hip hop, Premier has remained a constant, and even though the sound he helped create is heard less and less in the world of mainstream rap, the respect he commands is still immense. It doesn’t matter if you’re into Young Thug or Ol’ Dirty Bastard if you’re a fan of hip hop in any form you pay attention when Premier speaks. Naturally then when the chance came up to speak to him as part of the rollout for his new single with Miguel, ‘2 Lovin U’ we jumped at the chance.

The conversation that follows is part interview, part hip hop history lesson. Premier makes a point to spell the names of his friends out for fear of misprint, he tells you who was in the room when he made a certain beat and why, when you ask him about his relationship with one MC and he’ll tell you how he came to know ten more. His career is so intertwined with the culture that every question turns into a story of rap music’s past. To paraphrase his friend and former collaborator, the Notorious B.I.G: if you don’t know, read this interview with DJ Premier, and you will know.

All good man. We’re hitting the road soon…this is a short one for me; I’m used to doing at least a month straight when we go on tour. We’re just staying busy man, keeping the music alive.

You’re a pretty busy guy; you haven’t really stopped since you started…

Nope, that’s the reason I got into it. I want to continue to make sure that happens.

Your career has spanned three decades now, what is it like to be DJ Premier in 2017?

Honestly, still the same man. I’m just doing what I’ve been doing. Since I started my career with Gang Star with my comrade Guru.

People who know me and my work ethic know that all my beats were made right there while you wait. It’s like putting in an order at a restaurant. Anyone that’s witnessed me make beats for them I’ve made those beats right there and then.

That approach has gone out of favour a little, do you think the batch approach to beat making is sucking some of the soul of hip hop?

Nah, your method is your method. It’s just when we were coming up; we didn’t have computers, we didn’t have pro-tools. Everything was on tape, so because of that, I thought that’s how you do it. I was at a session for the Wanted Dead or Alive album with Kool G Rap and DJ Polo, and I watched them programme the tracks right there from nothing. I thought that that’s the only way you do it. I couldn’t have a folder of beats; I don’t like that. That’s not my method. 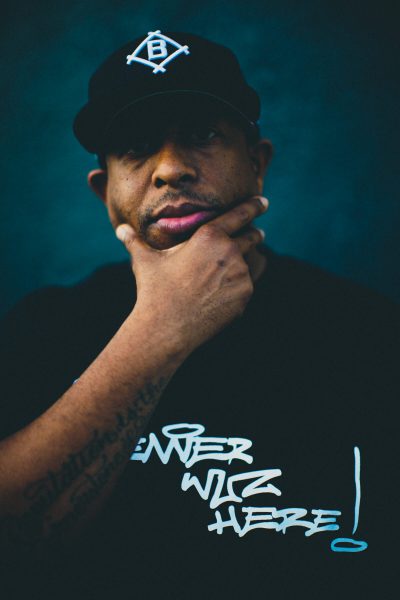 A lot of people bemoan the end of the ‘golden era’ of hip hop – as one of the principal architects of that ‘golden era’ sound, what do you think of the scene right now?

The scene I come from is fine; you just have to know where to find it. The venues are the same; you just have to know where to find them. It was like that in my day as well, I was talking to Q-Tip about this the other day, like ‘oh remember the Milky Way? Remember the Pay Day? Remember the Powerhouse?’ These were places that you had to whisper about like ‘Yo there’s a party going on’ and everyone was like don’t tell other people because when you got there it was packed.

The young generation has that [trap] sound on lock; I don’t need to do that style. Everyone’s making it the same because they’re fighting to get their song on the radio and you had copy-cat artists in our era too.

I’m sure a lot of people copied you…

Yeah, but the pure stuff always rises to the top.

It seems like paying respect to people you’ve lost is a big part of your career, Gang Starr always made a point to honour Big L, you’ve got the Headcourterz show on Sirius FM, how much do you carry those losses with you?

Everywhere, they’re in my heart and soul every day. I’m motivated by what they left behind and what they mean to me, I miss them all equally. I miss Guru, I miss Big L, I miss ODB, I knew all these guys, I knew Big Punisher… it’s a painful loss, but I’m glad I can hear their voice on a record, watch their body move in a video. I can mourn them; it helps you move forward. Rest in peace to Crazy Toones as well man; he just passed after we shot a video with him for my label

You also worked with the Notorious B.I.G a lot; this year marks 20 years since his death, what was your relationship with him like?

It was an old relationship because we used to live down the block from each other. I moved from East New York, Brooklyn, to the Bronx, 183rd Street, which is where I used to see Dame Dash, Positive K and Jay-Z was with them, I knew Jay-Z from way back but then he was getting ready to do the Reasonable Doubt stuff, we were all from around that area. In 1991 I moved back to Brooklyn to Ford Green which was near Bed-Stuy, so whenever I needed to go to the store or hang out on the corner, we’d see Biggie and the whole Junior Mafia out there on the corner. They knew who we were already, so we all just became friends. We’d kick it and talk about music, and Biggie would show me his music, next thing you know he got a deal with Bad Boy and became the Notorious B.I.G, and there we go.

What was the first record you made with Biggie?

The first record I did with Biggie was ‘Unbelievable’, it was my first gold single. It was the B-Side to ‘Juicy’.

Do you have a favourite person to produce for?

I love to work with everybody, but definitely Gang Starr, because I was in the group. I am in the group, we never disbanded, even when Guru died we still signed. Before Guru passed, you never heard either of us say Gang Starr broke up ever. Gang Starr is always my number one.

How did the collab with Miguel happen?

It was initially for his album, Wildheart. We met at SXSW about six years ago, and he saw me at the bar and bought me a drink, and we connected, and he was like “Yo we gotta work together”. Years passed, then he was working on his next album. He invited me in, and I make beats off top like I told you, so we just started jamming and he pulled out his guitar, I didn’t even know that he played the guitar, he just started playing guitar licks over the beat and I just hit record and said “play those licks for three minutes” and he played them. I took the best parts and cut them up with my drums; you know the kick and the snare and the 808. He just wrote it there, that version was on the album when he turned it into RCA.

An alternative version was released but it was called ‘Damned’, and it’s kind of a Metallica, Nine Inch Nails-y version, which is on the deluxe album. We still felt like our version should come out so we spoke to his A&R, Mark Pitts, and he managed Notorious B.I.G so I’ve known him for a long time, and they said we could have the song. That’s why I’m scratching ‘damned’ because that’s what it’s originally called.

You’re playing Oval Space tonight, what do you think makes a bad show and how do you rescue it?

What makes a bad show is not putting your whole ass into the performance. Someone like me who’s being going to concerts since 1970,71 with my mum; my mum’s a huge concert buff, we’d always go together when I was a kid. The best way of overcoming a bad show is what we call ‘recovery’. You better recover in the next ten seconds, or you’re done. The most important thing is to go on stage with confidence, there have been days where I wanted to pass out on stage, but I’d still go hard. You’re there to do a service.