Although the so-called ‘conventional’ route to stardom may not begin with TikTok, Georgia Twinn’s fast transition from school student to signed pop artist is one that is both phenomenal and well-deserving.

Delving into the depths of pop to voice her own, personal experiences, Georgia has placed herself as an artist navigating through the pop sphere with a fresh outlook on the world around her.

Self-releasing her debut single in 2019, “On Your Mind”, Georgia’s Gen Z anthems about love, empowerment, and anxiety have resonated with hundreds of thousands of fans across the globe. Soon picked up by Virgin EMI and now also under the same management as pop titans Dua Lipa and Lana Del Rey, Georgia’s artistry has quickly found itself to be a winning combination of bold uniqueness and adolescent reality.

Already working with a number of writers and producers – including the likes of Lovesick, Lapsley, and Bastian – it’s easy to forget that Georgia is still not yet 18, and she’s already achieved so much. 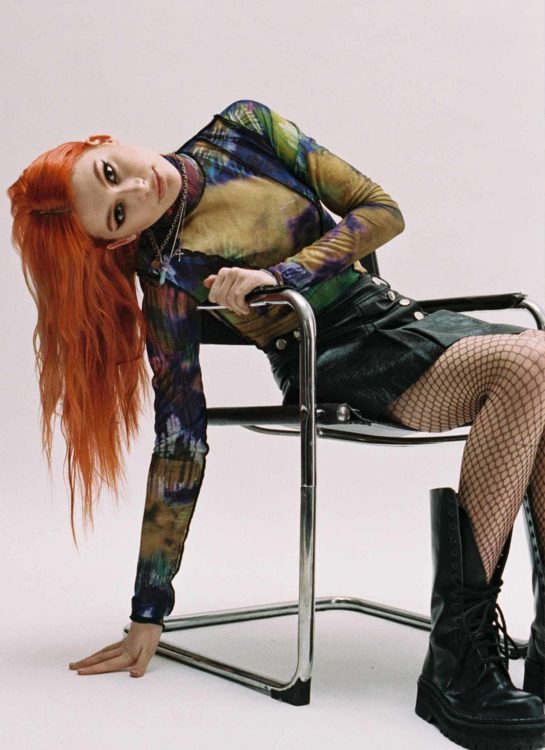 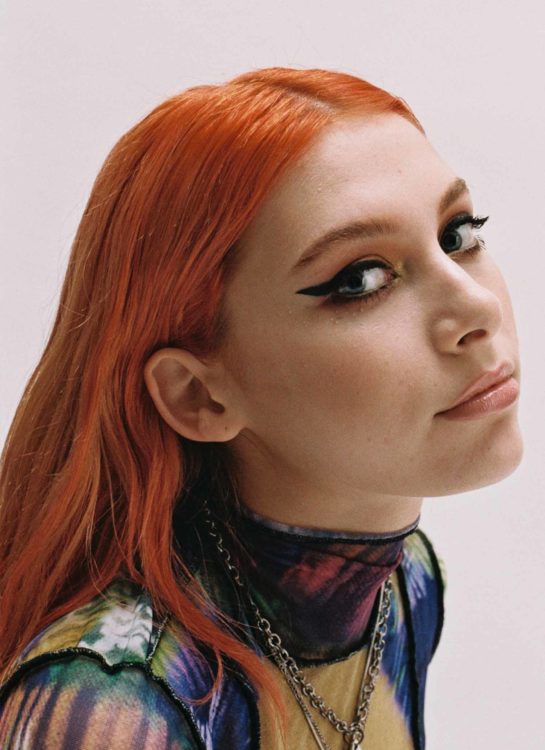 Setting the genre alight with her dark pop sounds and noughties aesthetic, her recent releases, like the explosive “You Shouldn’t Have F****d With Me” and the Snapchat-group-inspired “Raccoons”, continue to showcase her as a strong and powerful artist with an inherent talent for writing infectiously honest and relatable songs; a concoction that continually solidifies her position at the forefront of this decade’s pop newcomers.

When Notion caught up with Georgia Twinn, her hair is now coloured a fiery orange hue and her eyeliner remains to be as thick and bold as ever. “All of my friends were like orange?” she tells. “And I was like yeah!” She’s enjoyably chatty and a very down-to-earth character, so it takes no time at all to get deep into talking about her upcoming EP, the importance of surrounding yourself with the right people and the privilege of having very supportive parents. Dive in! 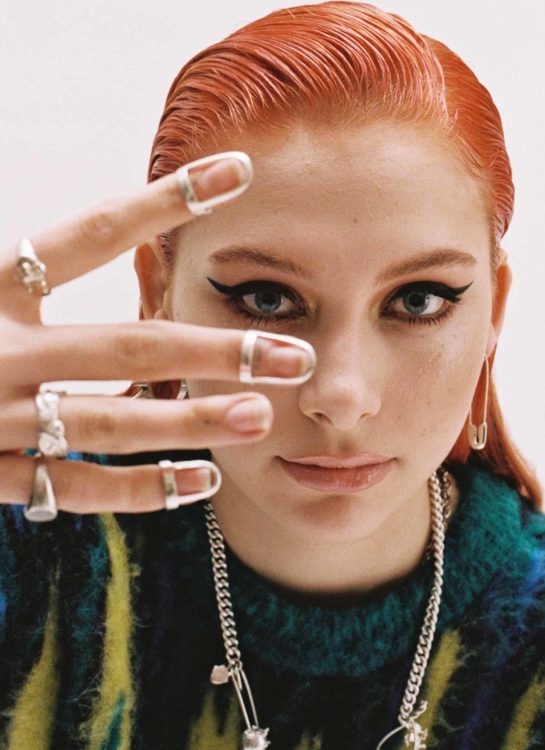 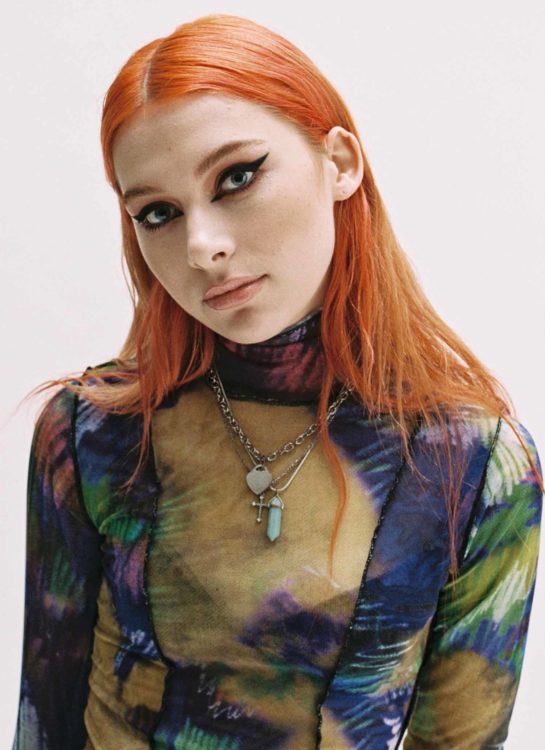 Your debut EP is out next month which is super exciting! How are you feeling about it being out in the world?

I am SO excited! Most of the songs on the EP I wrote a long time ago when I first was getting into the music industry. A fair few on the EP were actually from my very first session. A lot of them are [written] with Lovesick, they were the first people I wrote with properly. From that first session, we just clicked and things got going straight away. But we’ve had to wait quite a while, [the EP] was supposed to be out last year but obviously, the big pandemic happened so I’m super excited for it to be coming out finally. I’m just eager to see people’s reactions to the songs.

Do you think there’s more pressure because it’s a debut body of work?

I don’t really feel pressured, I feel mainly excited. There’s not really been lots and lots of pressure. I’ve just been in an environment that’s been really easy and fun and all the people around me are just so cool.

What can we learn about you from it?

In a lot of the songs, I talk about my personal experiences with relationships and school. Because at the time that I wrote the songs I was still in school and that was a big part of my life. I think you’ll probably learn that I’m quite honest – I’m very honest – I just like talking about what actually happened and making music out of it. 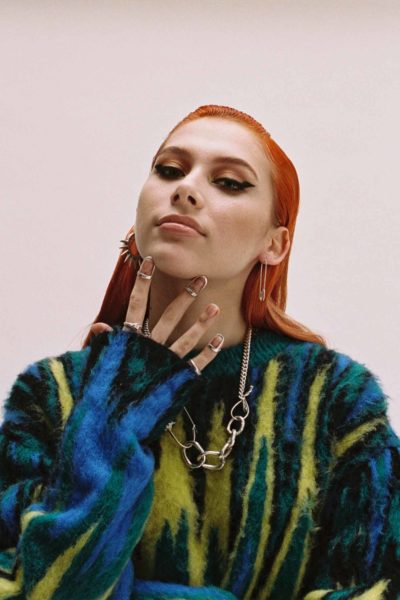 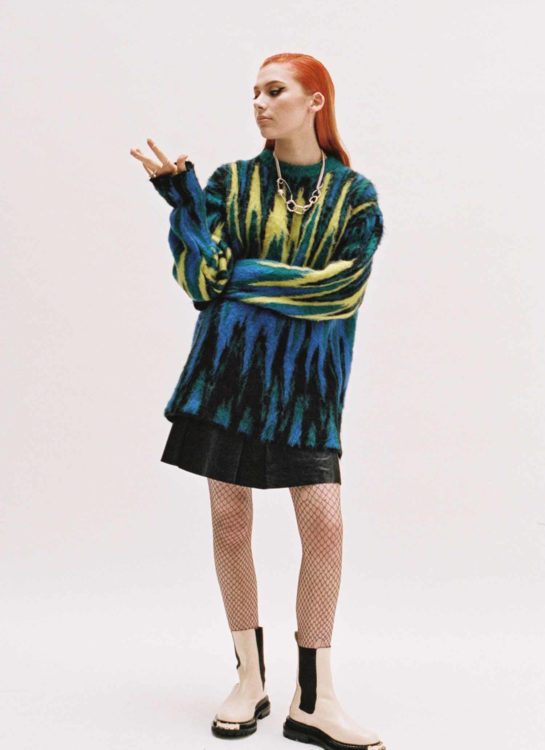 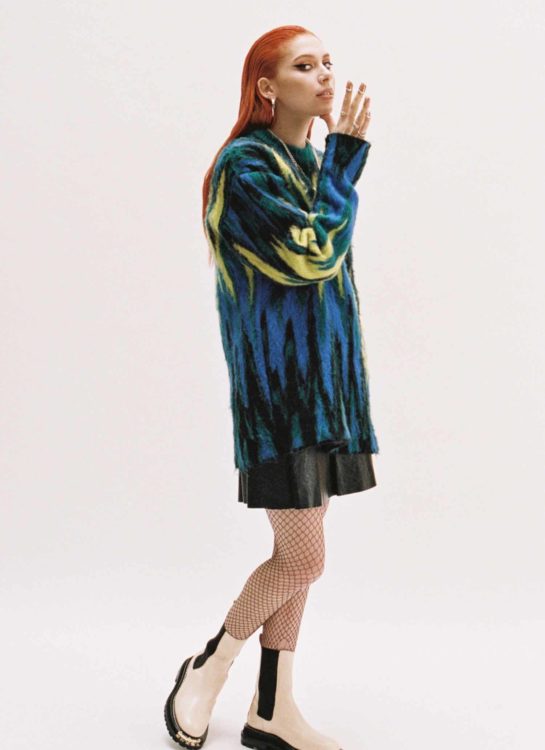 Have you found it difficult to keep being creative over this past year? How do you think it’s influenced you as an artist?

Obviously, everything’s been from home, so it’s been weird not being able to properly go to shows. I want to go to shows to experience what it’s like and get myself ready for that kind of atmosphere. I’ve definitely missed that aspect of it. But creatively, I think it’s given me the chance to develop personally. All this time I’ve had to myself, I’ve kind of been on a journey of self-discovery and just trying to figure out who I am and how I want to sound. I think I’m kind of grateful for the lockdown because it would’ve been in a completely other direction otherwise. It’s made me focus more on myself and my mind.

The songs you’ve dropped so far have received so much praise. What’s been the biggest highlight for you so far?

Probably getting on Radio 1! That was pretty cool, just hearing my name on the radio was really surreal. I’ve grown up sitting in the car praying that one day they say my name. But it was definitely a shock [to receive support on the previous singles] because you just never really know how things are going to be received. But the support that I got was really cool.

So, your music is mainly rooted in dark pop, what is it particularly about pop music that you love so much?

I like just how fun it is. You can just have fun with pop and explore so many options. “I Don’t Mind” was obviously a pop song but it was about my anxiety; so it sounds really cute and lullaby-y and happy but actually I’m talking about how this guy made me so anxious. I like putting a twist on a lot of songs, so most of them have one meaning on the outside, but there’s also a deeper kind of meaning. People will interpret it one way but it’s actually [written] because of a different way. 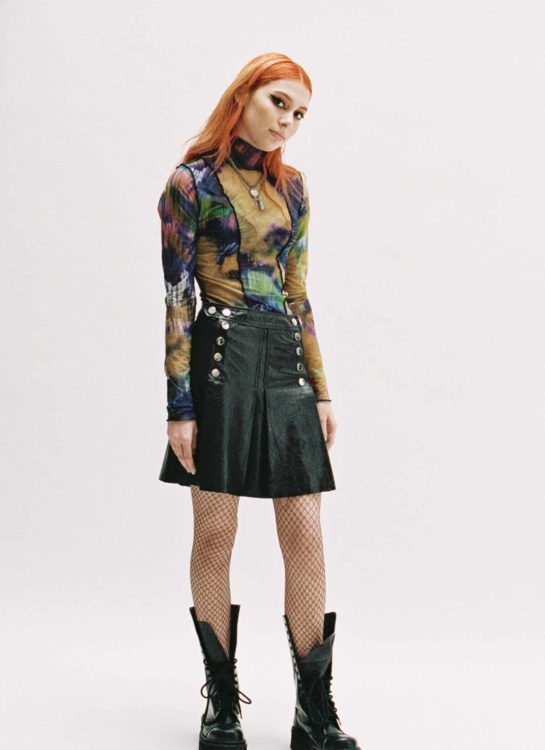 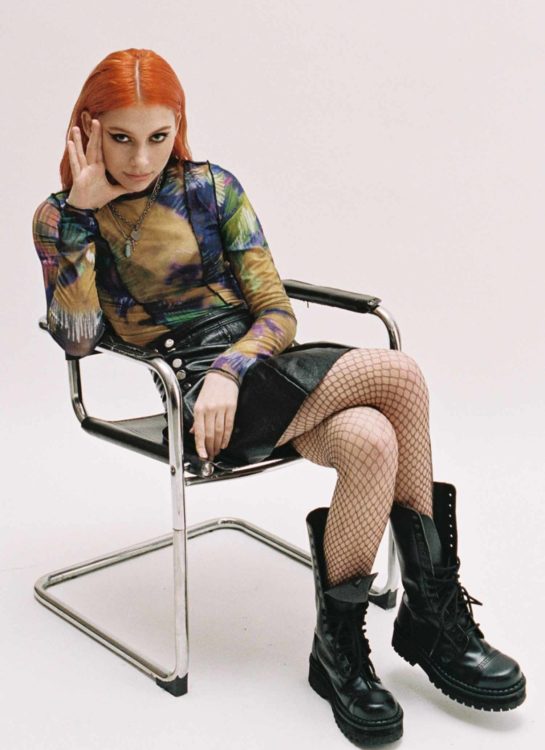 Are there any particular artists who have really inspired your sound?

I’ve always been obsessed with pop stars like Lady Gaga, Taylor Swift, everyone, but the main person that I love is Lana Del Rey. I discovered her music when I was like 10 and in my childhood, I didn’t have the best time, so it’s good that I found her as her music really helped me. It just inspires me every day when I’m writing, she inspires me a lot. When I met with my management for the first time, I spoke to her manager and I was going on about how much I loved her and he sorted out tickets for me to go see her at Latitude and I went and oh my god it was amazing, I got to meet her.

Oh wow! How was that?

It was amazing, she’s still my wallpaper! [Shows me her phone background.] She was lovely and she offered me some Doritos, she was great. Dream come true!

Do you think it’s important for you to surround yourself with the right people who will nurture and support you?

Definitely! I’ve been lucky to have such a supportive team. Going into everything quite young and uncertain… it was very uncertain because I was in school and I wasn’t really sure what I was doing with my future. I wanted to be a singer, but I just never thought that it would happen, I just thought it was impossible and I didn’t know how to get into any of it. So, in school, I was initially studying to be a detective, but then all the TikTok stuff happened and then I got this following and everything just happened in a sequence of events.

When did you realise that music was the right path for you?

It all just seemed to happen at the right time. Once I had this following from TikTok it all kind of spread on to different platforms and I started posting singing videos on YouTube, just like covers. And that’s how I got the opportunity to write with a producer and come up with a song and actually put it out. A couple months later, that’s when I got an email from Universal Music and I thought it was fake! But I read it again and I didn’t even know what to say because they wanted to meet me. I was doing backflips in my room like “Mum, Universal Music want to meet me!!!!” 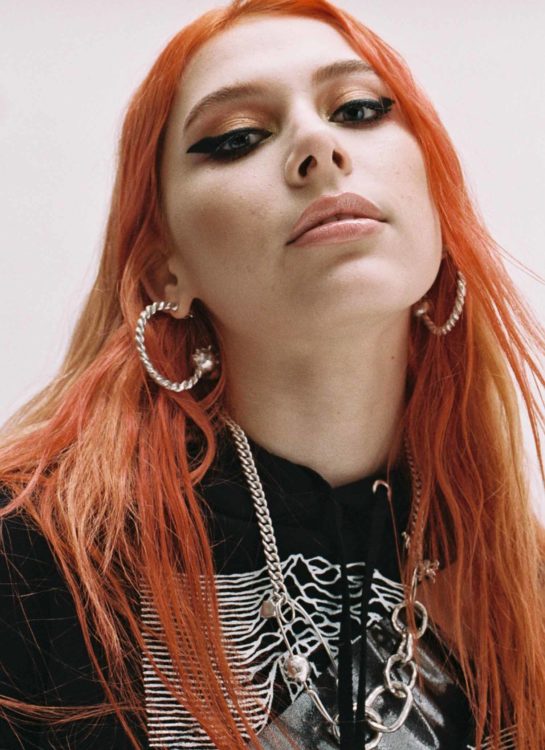 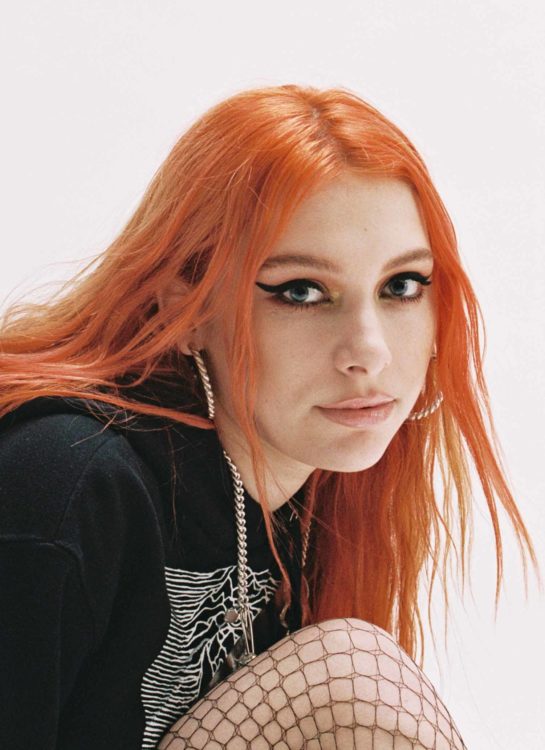 What do your parents think of it all?

My Mum loves it! So does my Dad, they both love it. My Mum and Dad are separated, and I live with my Mum and she’s just amazing with it and takes me to all my shoots and everything. She’s literally there for every second of it. She also gets on really well with my team as well so it’s always like a great atmosphere where we’re all together. But my Dad is a bit of an oldie, so he likes old rock stuff so obviously, my music is not his cup of tea but he loves it. He loves seeing me doing what I want to do.

Do you think with social media, like with your following, it’s important to be a positive role model there? I don’t really want to use the word role model because we’re not forced to be role models on social media but do you feel like you’re inclined to be that for your audiences?

I’ve grown up with social media; I’ve had an Instagram account since I was 11. I’ve always looked up to people on social media and I feel like people who have big followings do have a responsibility, especially if their following is younger. They do influence people, so you do have to be careful with what you say.

How do you combat the bad side of social media? Do you ever get horrible comments?

I think the best thing to do is not look at it at all. Saying that I feel like a hypocrite because I look at everything. You do have to just ignore it; people are going to say horrible things because there is no [real] confrontation with it. 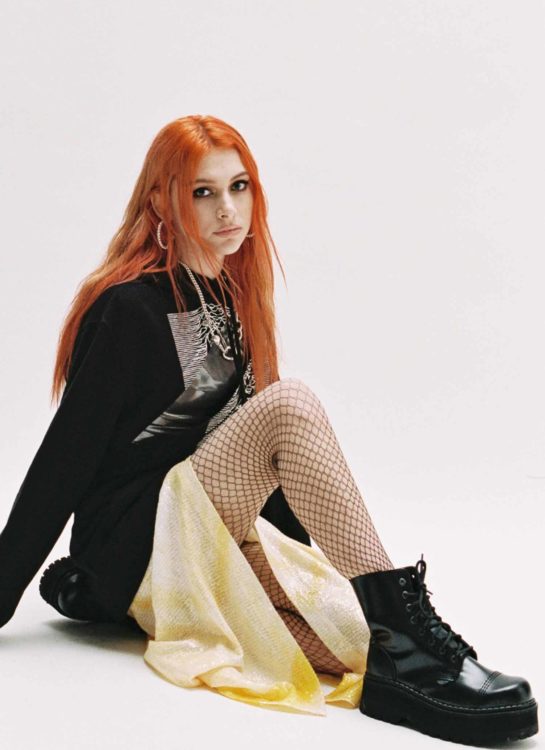 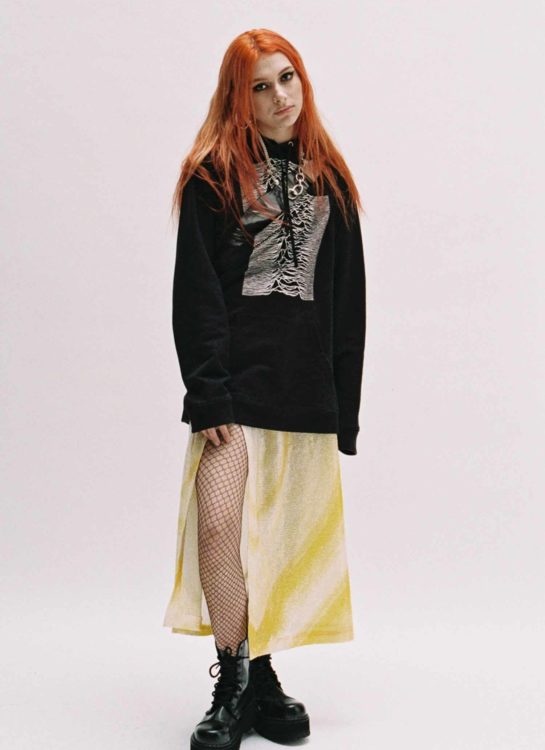 What’s one thing you’re hoping to achieve this year?

I just want to do a live performance. I haven’t done any shows yet, I’m itching to do that. I really want it to be in London.

So, what’s next for Georgia Twinn?

I’m always writing. There’s always something that I’m working on that I’m always excited about. I have a whole bank of songs, like I’ve been doing it for almost two years so there’s a lot of songs that are just sitting there. 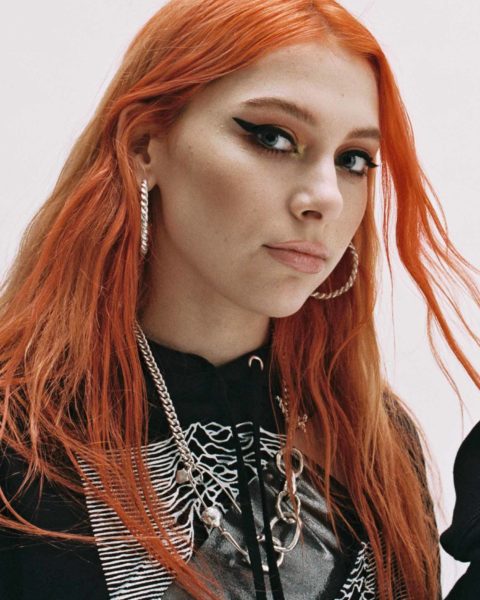 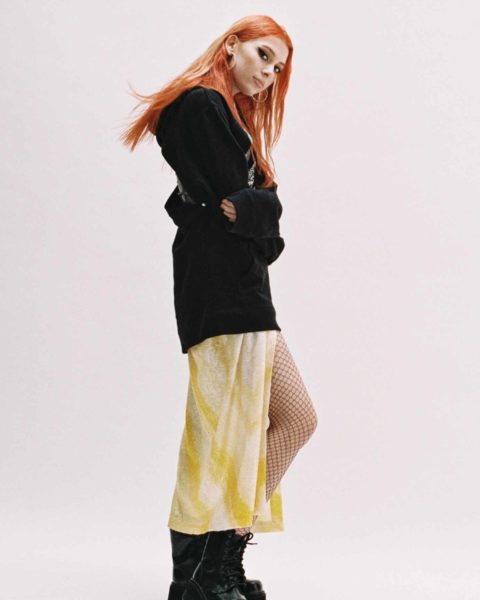 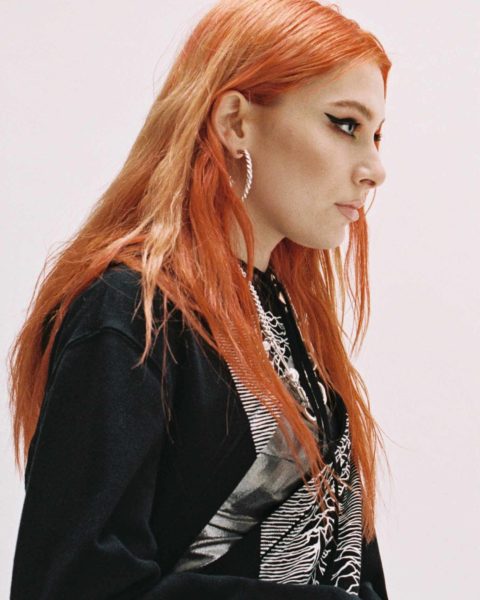 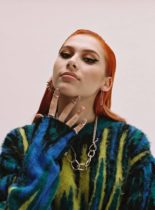