In the Mix: Emily Nash

Rising DJ and producer Emily Nash is taking the electronic world by storm. We heard about her key influences, journey and Ministry of Sound signing. Plus, hear her exclusive dance/house mix.

Worcestershire-born DJ and Producer Emily Nash is quickly making her mark on the UK Electronic and House scene. She’s worked alongside the likes of Fisher, Lowes and Navos, had her music played on the UK’s leading radio stations, and signed with iconic record label, Ministry of Sound – all before her 21st birthday. And with the recent release of her new track ‘Garden’, it seems Emily has no plans to slow down in 2022.

Her infectious, feel-good commercial house tracks have racked up an incredible 2.7 million Spotify listeners in 2021 alone, as well as securing multiple features on the biggest electronic playlists such as Spotify’s ‘UK House Music’, Amazon’s ‘Sound of Modern House’ and ‘MINT’.

Following the release of her hit single ‘Pressure’, her name sky-rocketed. She has since been featured on Amazon’s 2022 ‘one’s to watch’ feature and secured a Mini Mix on Danny Howard’s ‘Dance Party’ show on Radio 1.

With an already impressive portfolio and an ambitious charm, Emily is surely destined for big things.

From her top musical inspirations to what it was like to work with some of the industry’s biggest names, Notion caught up with Emily to hear about her rise. Plus, hear her exclusive mix!

You’ve performed at Creamfields and Leeds, featured on playlists by Amazon and Spotify, had your songs streamed on the likes of Capital, Radio 1 and Kiss, all before you turn 21 – how does it feel to be so successful at such a young age?

It’s such a weird feeling, I wake up some days and just think I’m in a dream. I feel incredibly grateful and lucky to be In this position. The success that’s come so far at the age of 20 just makes me think what will it be like in 5 years time. Will I finally get that Number 1 spot on the charts?! It’s an incredible journey.

How did you fall into DJing and producing? Did you anticipate your success so soon?

So I first started Producing when I couldn’t get into Sixth Form because I didn’t manage to get a high enough maths GCSE. I went to my local college which is Kidderminster College and they asked what I liked to do. I said I enjoyed music and then they put me into a music production class and ever since then I haven’t stopped making music and I absolutely love it!

No way did I anticipate this success so soon. I remember being sat at home a few weeks after I started the college course and I had an email to say BBC Introducing played one of my tracks on the radio. I’d never been so excited and I just thought it would be a one off until Jaguar from Radio 1 then discovered me and all I can say is a massive thank you to her. I owe her so much.

I also got management in 2021 which is with “The Weird & Wonderful” I have Steven Braines & Sophia Kearney looking after me and I can’t thank them enough for the opportunities they’ve given me so far.

What was it like working alongside Lowes and Fisher at Leeds and Creamfields?

It was an unreal feeling, being put along side those names I thought it was a mistake! It just makes me feel happy and makes me think that I am doing something right.

Who are your three biggest musical influences?

How did you go about creating your distinct sound and identity as an artist?

So before lock down hit I produced a range of stuff but mostly underground/tech house vibes.

And then in the middle of lock down I had a sudden urge to produce commercial tracks and following the releases of the commercial tracks it seemed to be a success! My first track with Ministry is tech house vibes I wanted to sort of take it back to a similar sound of my very old stuff when I first started producing but also make it current at the same time. As for my identity I’ve kept with my own name “Emily Nash” so there’s no hidden name behind it haha.

How did it feel to be signed with Ministry of Sound and how did it come about?

Signing with Ministry is something I definitely will never forget. It all started when Andrew the A&R had asked me for some demos. He loved all the tracks but there was one particular track that stood out which was my latest release “Garden”.

At first I thought I was too young to be going into such a big deal with such a big label but you’ve got to take these opportunities while they are there and sometimes you just have to risk it and do what you think is best. I definitely have no regrets.

I think it’s down to making a banger and giving it to a label as well. I use to self-release a lot, but as soon as I signed with Stress Records my numbers flew up. My most successful track with them was “Pressure” and I think that’s what brought in a lot of attention and followers.

Who has been your favourite artist to collab with so far and who would you like to work with next?

I did a session with Navos which was really cool but also worked with someone called Nuala and her voice was just insane. I’m open to working with anyone but my one dream collab is to definitely make a hit with Becky Hill. It’s funny because she’s from the next town to me which is called “Bewdley” about a 10 minute drive away.

What is your all-time favourite house anthem?

One of my all time favourite house tracks has to be “Duke Dumont, Jax Jones – I Got U” as soon as that first spark of summer comes along I have it blasting every day! It’s a track everyone knows and loves.

How have your friends and family reacted to your rise in fame?

My friends & family are so supported and really happy for me. They’re always asking what’s next in the pipeline and they get really excited over it. It’s almost like they are riding the wave of this journey with me sometimes, it’s amazing to have so much support.

What is your dream venue to perform in?

This one’s a tricky one, ever since I went to Ibiza it’s always a been Cafe Mambo. It’s just such a magical place and you feel so much happiness when you’re there. But another dream venue to play at would definitely be PrintWorks London!

Tell us about your Mix for Notion – what was your creative process behind making it and what vibe are you going for?

So my mix for Notion is based on tracks I love and tracks that I’m feeling at the moment. I keep my mixes to a tech house/dance vibe. I’ve gone for a happy energetic vibe on this mix and will hopefully get people ready for the summer.

What are your future goals for your career in music?

Another big goal for me is to play at Glastonbury Festival. I’ve grown up going to Glastonbury nearly every year and I think a lot of music inspiration has come from being lucky enough to visit the amazing festival many times.

And of course getting into the Top 40 charts is up there on the goals list.

What’s your go-to track to listen to at the moment?

I tend to listen to a lot of Gorgon City tracks and their old albums, but I’m also a massive fan of Nia Archives. I really love her track “Forbidden Feelings” at the moment. Another go to track at the moment is Eli & Fur (Feat. Camden Cox) – Burning. I’ve met Camden a few times and she’s just so down to earth and lovely. I’m looking forward to her success this year.

Can you tell us anything about your upcoming / future releases?

My upcoming release is super catchy. I think even after listening to the track just once you’ll know the words off by heart. It has a mesmerising dark female vocal with a interesting synth line that plays along with it.

I’m excited to see where this track goes, it’s definitely one of my favourites to date. 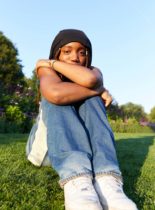