Year after year, attention is yet again turned to the staggering skew of festival headliners toward men. As the summer season rolls in and the crowds don their wellies, pitch their tents, and once again dance until their shoes are caked in mud, it’s starting to feel as though festivalgoers are more likely to spot a rare bird or animal, or something really weird and wonderful, than a female or gender non-conforming act with headline status on stage.

Reports of the same male-dominated line-ups and pleas for improvement have sounded out like a glitched record. The bias toward booking male acts has become one of the British music scene’s most blatant, prominent problems, with many festival organizers not even attempting to hide it, let alone remedy it. After Covid-19 put the events sector on hold – creating a chance for a reset following a year that disproportionately affected women, particularly women of colour – a Guardian analysis showed that of 31 upcoming events in 2021, most still weren’t up to the mark on gender equality.

The Isle of Wight Festival totalled a 73% male line-up; Victorious, Slam Dunk and Bloodstock over 80%; TRNSMT 61%; Creamfields 91%; and Kendal Calling’s partial line-up 79% – despite that the festival had signed up to an initiative tackling gender inequality, Keychange, in 2018. Meanwhile, Reading and Leeds have announced 6 male headliners.

Keychange’s UK project manager, Maxie Gedge, told the Guardian. “We usually stay on the positive side instead of calling people out, but we’re getting tired,” said Gedge. “It’s not an accident anymore, it’s a statement of exclusion. The fact that this keeps happening shows that there are certain festivals that just aren’t taking responsibility, or they’re not viewing it as their responsibility when, in actuality, it’s everyone’s.”

Contradicting statements and failed promises have made it clear that some festival organizers are merely paying lip service to the fight against industry sexism. Glastonbury co-organizer Emily Eavis complained in 2019 about an absence of female artists: “They’re just not there,” Eavis said. Further defending the festival, she added that she is constantly pushing fellow bookers to schedule female acts but “there’s a whole brotherhood which is so tight. It’s impenetrable.” Meanwhile, Kylie Minogue, Janet Jackson, Miley Cyrus, Billie Eilish, and Lauryn Hill were among those to perform at the festival in 2019, but none of these female and non-binary greats were upgraded to headliner status.

Eavis’ comments have been widely derided by industry insiders, but they are indicative of the general sluggishness of change. Despite her ability to platform female and gender-nonconforming acts as a booker for Kendal Calling, Emma Zillmann has voiced her frustration that inequality is “not changing quickly enough… Remember that we’re trying to undo years and years and years of discrimination, and it’s just going to take longer to do than maybe it should.”

Strawberries & Creem are the latest to sign a 50/50 pledge with Girls I Rate, the first to do so with the Carla Marie Williams-founded charity. The festival team told Notion: “This is an ongoing, industry-wide problem in the festival space, so it runs deeply. Particularly in our genres or scenes, which have been historically pretty male-dominated, women and other genders have not been given the equal opportunities and platforms to perform that they deserve. That leads to a mismatch in terms of artist awareness and prominence, and creates more male big-name ticket sellers – so male artists are prioritized at more events, and the cycle is entrenched like that.”

“People are still not taking the conversation seriously enough, and events promoters aren’t acting decisively (or at all in some cases). Granted, this is a deep-seeded, industry-wide problem, so it will take a while to unpick it and work towards gender equality on all line-ups. But there has not been nearly enough progression the last few years – lots of talking, but not much doing.”

With all this going round in circles, the continuing gender imbalance begs the question: how hard can it really be to book female and marginalized gender acts? Becky Ayres, managing director of Liverpool Sound City who has partnered with Keychange, shared in The Guardian the rumour that agents are raising the prices of female performers to profit off the drive for gender equality. In NME, co-head of booking agency CAA, Emma Banks, expressed her theory that festivals use year-round events to gauge sales before making a safe bet on their headliners. The people behind the decisions also lack gender diversity; Keychange reports that 70% of the music industry workforce is male.

According to the team at Strawberries & Creem, it shouldn’t be so difficult. “There is a wealth of amazing female talent out there, some incredible women DJs and rappers, that should be getting far more bookings on festival stages. So whilst there has been a male skew in the past, there is absolutely no reason that should remain the status quo – we have to change things, and we all have a responsibility as promoters to contribute to that positive change.”

The Cambridge-based festival has enlisted over 50% female and gender-nonconforming artists this year. Yet with some pledges falling through, it’s clear that more needs to be done – more artists of all genders need to weigh in. Last year, Brit Award-winning band The 1975 stated that they are now refusing to play at festivals without a certain percentage of female and other non-male acts. In 2016, Glastonbury created a stage dedicated to female and marginalized gender acts, Sistxrhood, yet with this move at risk of side-lining – or even, perhaps, patronising – these performers, rather than putting them in front of bigger audiences, this certainly isn’t a sole solution to the issue.

At festivals, the entrenched issue of sexism runs even deeper. Only last year, as allegations of misconduct against Marilyn Manson spread like wildfire, Wolf Alice’s Ellie Rowsell claimed the musician upskirted her at a festival. With those backstage overwhelming male, it is sadly less of a surprise that incidents of misconduct and even assault are increasingly shared. Apart from the unfairness of inequality in festival line-ups, the subject is also an issue of safety.

For festival bookings, things aren’t all downcast. Festival Republic has launched Re:Balance to grapple with the issue. Only Love Supreme and Deer Shed festivals are platforming more women than men, while Reading, Leeds, Standon Calling, Black Deer, Kaleidoscope, Camp Bestival, Gala, Wide Awake, End of the Road and Cross the Tracks aren’t far behind. Some are featuring only women, including Native, Loud Women Fest, Boudica, and HearHer. Festival inequality has too long been festering as the joke of the music industry, but the topic is no laughing matter. 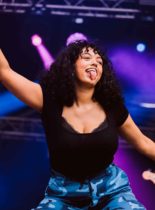