Omega Sapien: “Collaboration Is Definitely a Big Part In My Music Style”

Omega Sapien discusses making art from the tough times, collaborating with Balming Tiger and a love letter to his dog.

Omega Sapien is an artist from whom fans have come to expect the unexpected. With unpredictability in every musical move, his offbeat earworm tracks have ranged from odes to his pet dog, to celebrations of garlic. He’s hot off the heels of a ‘Tiny Tour II’ in the UK and Europe with alternative K-pop group Balming Tiger – of which Sapien is a founding member – and a new EP, ‘Wuga’ delivers eclecticism in spades.

A musical collective ever-shifting in membership, Balming Tiger describe themselves as a “multinational alternative K-pop band” with a goal for global impact. Their vision is to reflect and represent the younger generation of today’s society, and their members enact multidisciplinary creative outlooks. The collective currently consists of performers Omega Sapien, sogumm, wnjn, and Mudd the student, producers San Yawn and Unsinkable, video directors Jan’ qui and Leesuho, DJ Abyss, and writer Henson Hwang.

From this month’s EP ‘Wuga’ – a project boasting production credits from Grammy nominated producer Baueer and including previous singles “DDOKBOKKI” and collaborative track with Sega Bodega, “Plum” – new single “JENNY” is a tribute to four-legged friends. Coming alongside a VHS-style video directed by fellow Balming Tiger member Hong Chanhee, it serves as a mission statement for the artist’s latest EP. 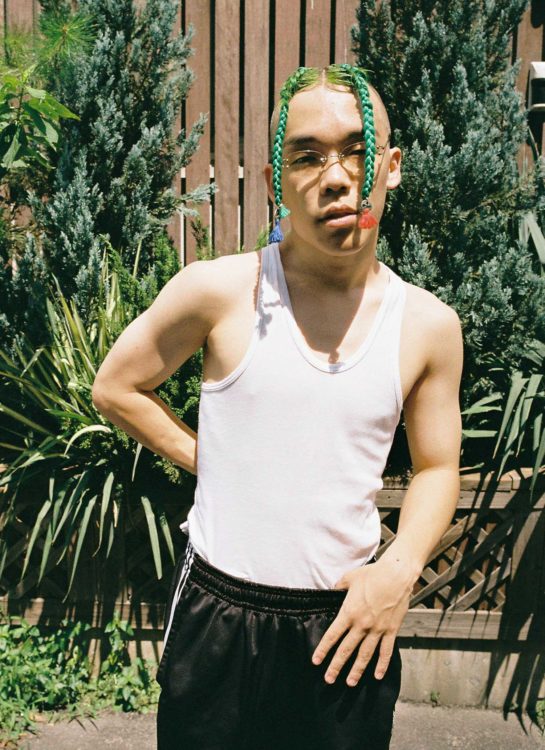 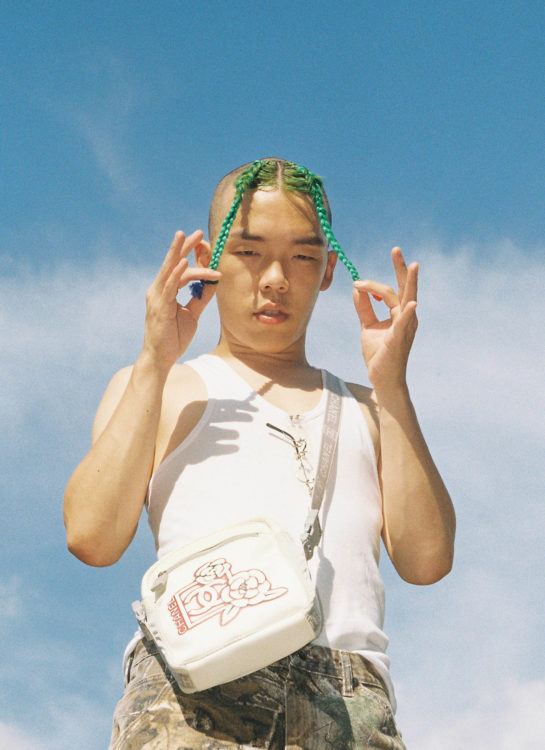 Congratulations on the single “Jenny” from your new EP, ‘Wuga’. We understand that the song is actually an ode to your furry companion. How did that come about to inspire this new track?

On my previous album, ‘Garlic’ was pushing my boundary, pushing the limits, of how far that I can go as an artist in terms of expression and creativity. We we were linking up with Bauer and he’s an amazing producer and I was pushing the creative limit. But also I’m trying to go back to like what I first love, which is hip-hop. So I wanted to bring out that aspect – which is more innate in me, I think, compared to like ‘Garlic’, say, because I’ve been doing that shit for a longer time. I say this is that the approach was very. How do I say? Like on the spot? Because it’s so easy. You know, for me, it’s supernatural.

Your dog makes a cameo in the visuals, directed by fellow Balming Tiger member Hong Chanhee. What was the process behind the surreal VHS visuals? What were you trying to put across?

I think it’s just this thing like he loves VHS, retro, he loves black and white. Usually, when we make music videos, it’s super well planned. I will start with a mood board or start with a concept. We’d be like super serious about it. So we would like monitor every footage and kind of go OCD about it. But you know, the song is basically improvised. And obviously, the director is a very talented guy. Not only that, he directed the video, but he also was the stylist in the video as well. I love it. It’s very fun.

You’re always working with new producers, both as a solo artist and as part of Balming Tiger, is collaboration important to you? How do your collaborations usually come about?

Yeah. I think collaboration is definitely a big part in my music style, I don’t know how to produce, so I always have someone with me to make the song, actually. I will get shown a beat, and then I jump on the vocal. I don’t really know much about the producing and mixing and all that stuff, but luckily I have very talented people around and they help me out.

I don’t really like working by myself, I think. I mean, it’s good sometimes, but just quite boring for me. I think it’s way more appreciated if I’m honest with other people and we’re all having fun and in that sense the music just comes out naturally. Like breathing. But when I’m alone, it’s more academic, like, oh, let’s do this and this and that, which is also necessary. But that is not the part I enjoy the most. I love working with other people, connecting with other people and sharing the energy. And also you learn so much. I think I’m good at seeing their strengths, I’ll say like, this guy listens to a lot of music, so maybe I should ask him for music recommendation or, this guy knows so much about fashion so why don’t I ask him and let him help me out with my clothing and stuff like that. I get a lot of help from them and it’s just like, there’s so much you can’t do by yourself, unless you’re like a one in 10,000 genius. Which clearly I’m not!

There are currently ten members of Balming Tiger and everyone definitely brings their own different artistic identity – what do you feel like you bring to the group?

I think I bring a lot of energy to the group. I give my advice and give my perspective on things that they’re struggling with. And of course, I’m a guy with a lot of internal struggles as well, but I always let it out and try to be a good person to be around. And of course, engineering, producing, they help me out tremendously. And also, I was fortunate enough to have a lot of experiences abroad. A lot of my friends, at Balming Tiger, are actually born and raised in Korea, so when we’re outside Korea I’m the guy who helps out people, helps translate, you know that kind of stuff.

And how would you describe your own music to people who hadn’t come across you before? Is making tracks that are fun and upbeat important to you?

I try not to limit myself. My music has to be high energy, my music has to bang hard. I’m open to adventure. I mean, I’m a guy that, boredom for me. It’s a killer. I just can’t stand boring stuff. It makes my life quite hard. You can’t get excited. 24/7. I think it’s changing all the time in a very short period of time, I think it applies to other Balming Tiger songs as well. I admire rappers that would just carry on for like 16 bars, 32 bars. But I just can’t do that. You know, I just get bored with the flow I think. So I just I would do like four lines and I’ll jump on to do some more and more lines. Or maybe I’m singing in order to you know, there’s always changing. It’s kind of similar to soul, I think it’s so fast changing. So quick.

I understand you lived in America for a time, alongside China and Seoul. Did this influence your musical style?

Definitely, man. I was so young. Living abroad, living in various countries. It shapes the person I am and obviously is going to influence the music.

Let’s discuss “Wuga”, talk me through the concept of the EP – what do you feel like this solo project allows you to express? Is there an emotion or vibe you hope listeners take away?

Wuga is… well the Uga Uga is onomatopoeia of the caveman. I try to be super. Improvised. Violent, provocative. So it’s almost. It’s almost primitive, like a caveman. And the art is a Caveman protecting a fire. Yes. I want to take it back to the cavemen.

Where do you imagine it being played?

I mean, honestly, it could be anywhere but it’s definitely party music. Dancing music. Everybody moves, everybody is drunk. Because I really believe it carries that primitive energy that we all have, that brings out the fun in you, you know? Simple stuff, dancing, singing, laughing, drinking, those stuff. And I can definitely see, like, people going to their work in the morning. They can just blast this and it’s motivation, their energy. I hope. And definitely for working out. I’m not a guy who works out, but I imagine that. I would not advise listening for driving, because, you might be speeding *laughs*

Do you have a favourite track currently?

I think my favourite is Bon. The song is not out yet. It’s one of the two songs that are going to come out when the EP comes out. Because about a year and a half ago, I was in a low fucking point man. I think a lot of my stuff back then or a lot of my motivation was driven from my ego back then, like bigger, bigger, more followers, more views, more acclaim, those type of things would drive me. But obviously Covid happened and now I’m not doing shows. I’m not on tour. And, you know, just overall low energy, everyone had low energy, I had low energy too. But that was only my motivation back then. I have a different mission now, but back then it was like that. So I had the low point in my life and that’s when the song came about. I felt numb, like not caring it was tough back then, a lot of personal struggle.

And the music paints that so well. And I think that’s why that’s my favourite song because. A lot of people love ‘serenade for Mrs. Jeon’ on ‘Garlic’, and actually one girl came up to me and said, ‘Serenade’ saved my life that helped me so much with depression, and by hearing that, it felt so much better than like, ah dude you’re an amazing artisan or like ah you’re so cool. It’s so much better because it’s kind of like gave me a mission. So I hope the song helps people that are going through what I went through.