Australian singer-songwriter, GRAACE, picks 10Trax that have inspired her emotionally and creatively during the pandemic.

GRAACE is fast emerging as one of Australia’s brightest and most creative new popstars. Her melancholic pop jams have projected her into the international limelight, receiving praise from the likes of The Fader, Marie Claire, Triple J and Radio 1. This all comes alongside reaching over 100 million streams to her name on Spotify.

The singer-songwriter’s new single “You Do You” is the first to be released from her forthcoming 2021 EP. This empowering track carries GRAACE’s unique take on pop down a darker path, with a deep bass-heavy hook that runs next to the younger singer’s soothing lyrical flow. “It was inspired by the honeymoon phase of meeting someone” describes GRAACE. “Personally, I’m somebody who doesn’t have a type and falls for personalities rather than looks or gender, it pulls me in like crazy when somebody has this certain energy about them.”

“You Do You” shows GRAACE embracing herself as a woman, being both vulnerable and strong in her rawest form. The release is accompanied by a music video inspired by the artist’s life-long love of skateboarding.

Now, GRAACE has picked 10Trax for Notion that have inspired her during these tough times.

"Joji’s new album is literally how I want to be greeted into heaven and listening to his music has opened my mind to being way more creative with what I write".

"Honestly just seeing such an incredibly talented and nice Australian artist kill it inspired me to keep writing during Covid when I was feeling really low".

"Sonically I have no resemblance but VIBE, Ashnikko makes me feel like my most confident self and she’s so inspiring".

"I only discovered Holly this year and she’s incredible. She really gets me into my deep emotions that are sad and angsty, and I feel like that side of me will always be my truest form".

"Getting Old" by 6lack

"I’m a really big fan of 6lack and have been for a while. This song in particular hit different during the pandemic because of the repetition of everything I’ve been doing and the lyrics really had me feeling some sort of way".

"Summer Walker to me such an incredible artist and woman. She’s so vulnerable and real but strong with her words as a woman and unapologetic and thats something I love incorporating into my writing as well".

"The lyricism on this song is really freaking good, was on repeat for quite a while".

"Worst in Me" by Julia Michaels

"I mean…. I can’t do an inspirations list without mentioning Julia. She’s one of the best song writers I can think of off the top of my head and she’s been a big inspiration for a while".

"She has this power to strike imagery in my mind when listening to her music. This song takes me back to touring in Germany in 2019 and this song really helped me through a lot when I felt really lonely overseas".

"Mannnnn… this song is so well written and produced. It really inspires me to amp up my creativity". 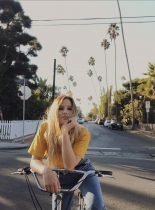