After a personal transformative era, Tamera proves herself to be music’s phoenix rising from the ashes.

Tamera is music’s breath of fresh air: a vibrant wild child with a beaming persona that shine’s as brightly as the voice she offers from project to project. With a melodic Midas Touch, it’s like every track she touches turns to nothing short of pure gold. Harnessing the power of female prowess from the likes of Beyoncé and Alicia Keys, Tamera is rising as an utter force to be reckoned with. 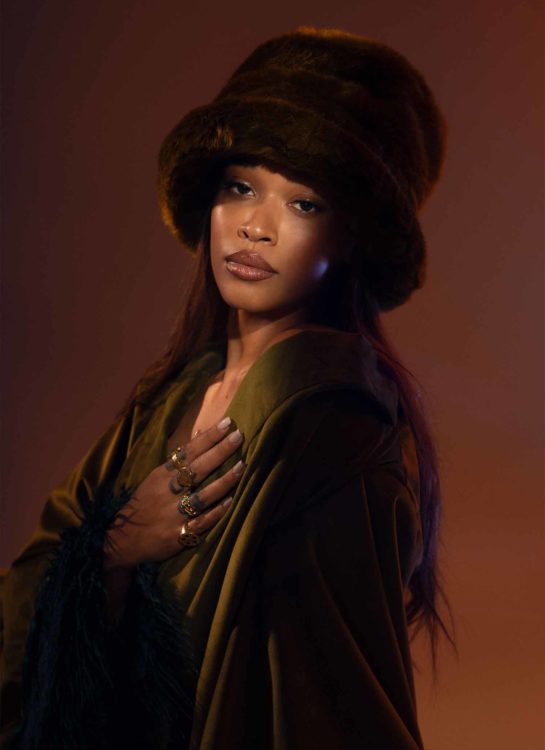 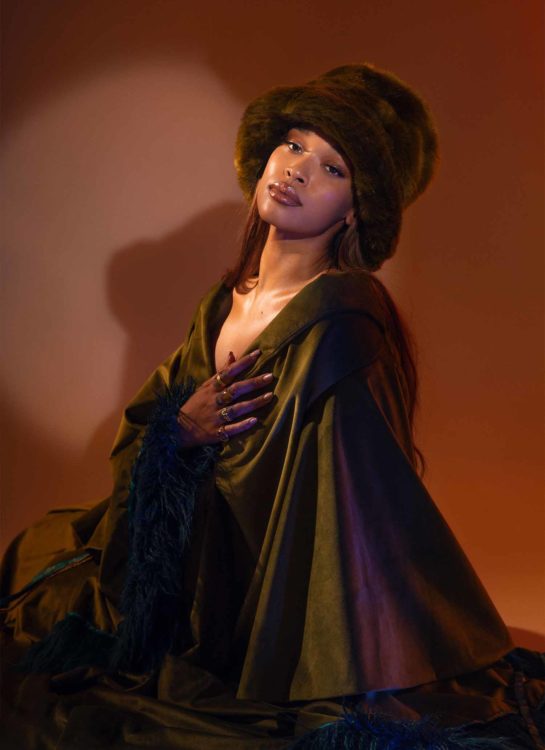 While Tamera’s bright personality is enough to enamor a listener, it’s her creative freedoms that are the true backbone to her growing success. “I think I’m drawn to so many different genres, to be honest with you,” she starts. “It’s definitely like a musical journey.” Well Tamera, if music is a journey, please take us with you. “Coming into the industry and going to the studio and working with loads of different people, I get introduced to a lot. Like some of the craziest stuff. I was played a random song from like the 30s or something, and the guy I was working with was like, ‘Just listen to the harmonies in this! I think we should stack up the harmonies in this kind of way.’ So, I try and take influence from every genre because there are always gems in there.”

What Tamera may not realise, her taking influences from these so-called “gems” is aiding her transformation into a sparkling gemstone of her own accord. In true ‘small town big dreams’ fashion, the singer grew up outside of London in a humble home surrounded by what is probably the most inspiring support system a young girl could ask for: an encouraging mother and grandmother. “[My mum’s] main message to me and my siblings growing up was to be real. Like in the plainest the sense of saying it–just to be real, to be strong in your truth. The minute you start faking things and pretending, that’s when you start to feel empty or less likely to be proud of yourself. And I think that transcends through my music a lot.” 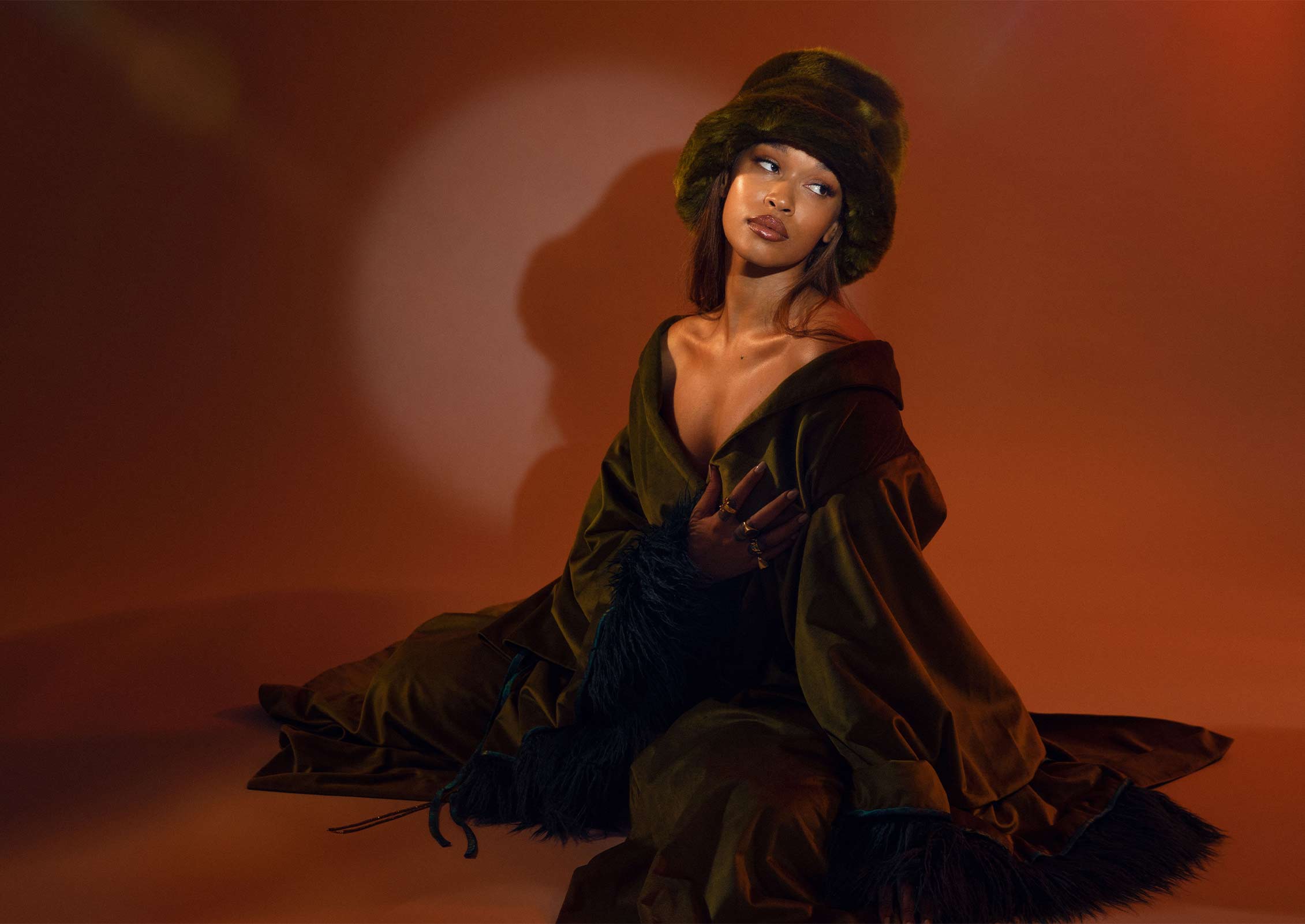 Agreed, Tamera. Listening to one of her songs is like experiencing a sonic diary entry. Put simply, she’s authentic, creative, and unafraid. “My songs are very conversational,” she offers. “I write them about things that I go through that maybe I don’t even understand myself, to try and get a clearer perspective of how I feel. My mum ingrained that, to be true to yourself. Be strong in your truth from a young age.”

Today, she’s arguably one of the most genuine rising starlets, but her candid approach to music wasn’t always an easy feat. “My grandma is a minister at a church. Growing up, she would push me to sing in front of other people because when I was young it was really embarrassing to me! I was very shy about it, and she knew that. She would start a few lines and start a few bars of a song on her keys, then she looked at me in the crowd and she’d be like, ‘Tamera, can you start this first for us please?’ She put me on the spot! She pushed me to have more confidence, to show my voice and perform in front of people.” 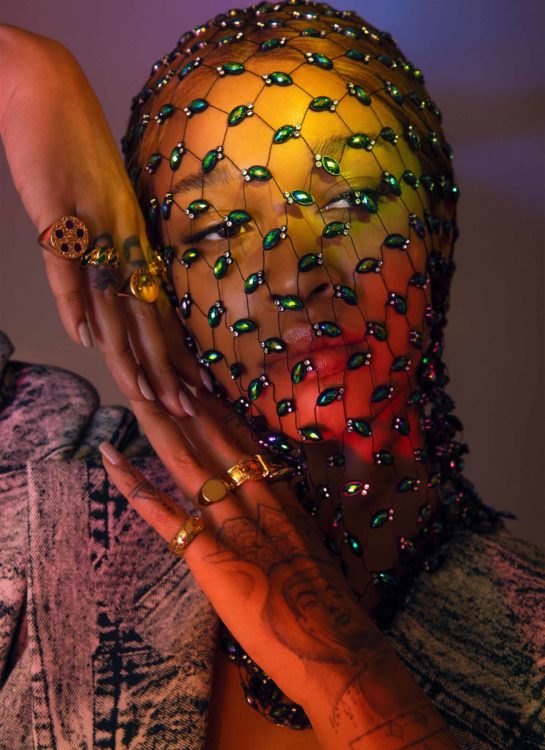 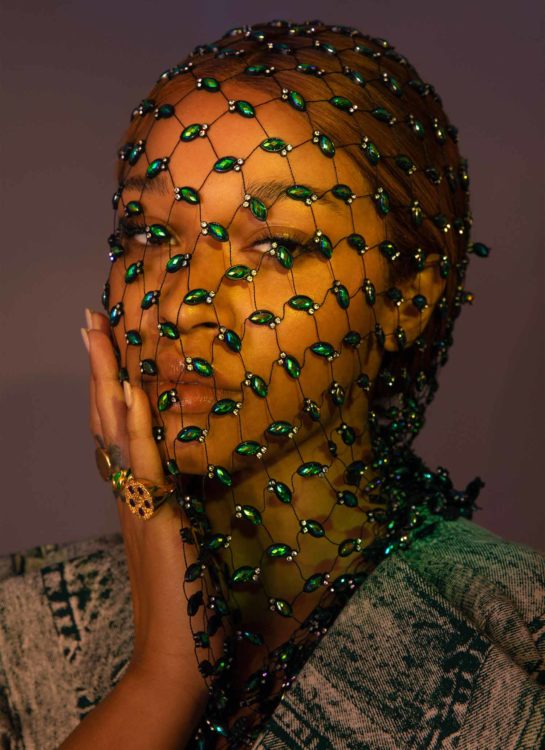 More than obvious, Tamera is loud and clear as she stands today. Molding herself into a confident singer proved fruitful for the artist after a string of successful singles over the last two years. From 2019’s “Romeo” to her latest drops “Wickedest” and “Strong for Me,” off her upcoming debut EP, Tamera is on the fast track to garnering a cult following. At her music’s core, she’s growing with her listeners–perhaps that’s the very magic behind her illustrious persona.

“All of the songs that I’ve released recently have been different colors of the same period of my life. I would say ‘Wickedest’ was at the back end of quite a turbulent part of my life, and I felt like I could break the chains and step into myself again. I could be free and be fire and all of these wonderful things that I had wanted to be. That’s where ‘Wickedest’ was born from. It was born from a very fiery part of myself.” 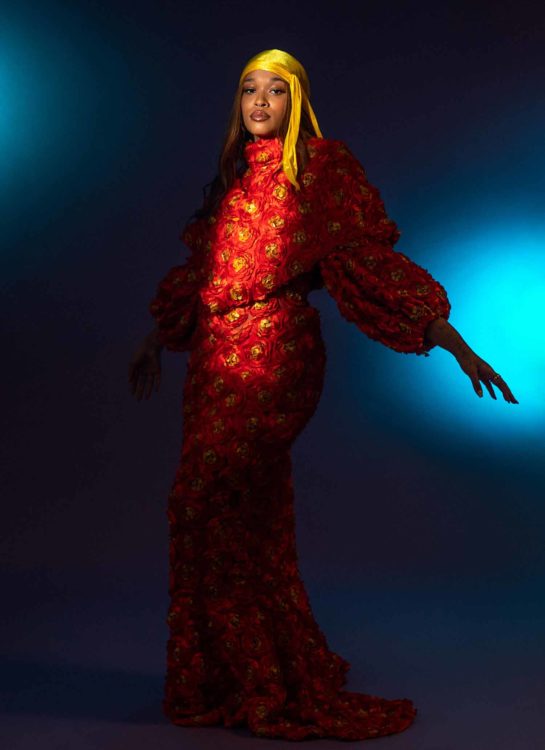 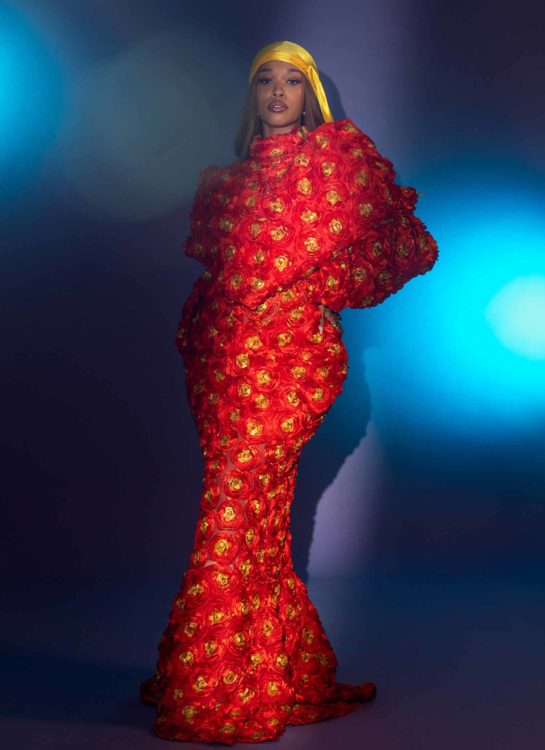 Transformative anthems may be the antidote to our post-pandemic woes, but how does such a heavy theme coincide with the rest of her forthcoming project? If the two lead singles could speak to one another, Tamera offers insight into how they may communicate.

“[With] ‘Strong for Me,’ I wrote about how I felt when I was going through the turbulence, the confusion, the destruction. It put me in a space where I felt very vulnerable about the way I felt. I wasn’t used to feeling that way. It was hard for me to communicate that in music and to my close circle. I felt like I really went into myself during that period, and I didn’t want to process, I just wanted to get out of it and get through it. I think by the time I’d come out of it I’d already had my “Wickedest” stage. I was a little bit more detached from the situation and I could look at it a little bit more. When I was able to do that, I wrote ‘Strong for Me,’ and that song just came out of nowhere. I really do believe it was my body or, my consciousness telling me, ‘OK, this time, now you can understand what you were going through. This is what it was.’ And it manifested into a song.”

Above all else, it’s evident that Tamera’s primary inspiration draws from her own experiences pushing her boundaries into the most vulnerable of territories. “It’s a journey. And when you’re on a journey, you haven’t reached your destination yet. You’re still going through it. There’s so much that can happen. There are so many ways that you can get through and grow and be better.” 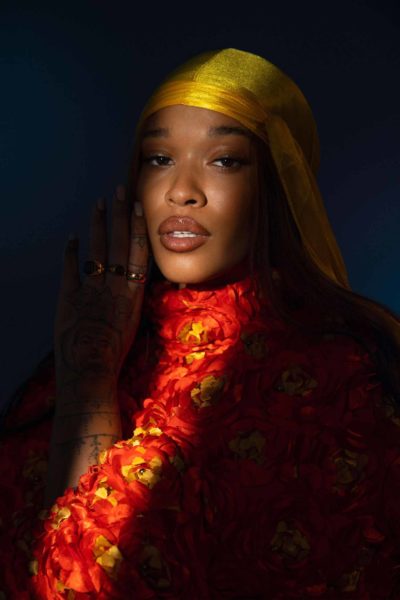 What’s clear, Tamera is proud of her past and the mistakes that come with entering adulthood; they’ve allowed her to shed her previous shell and morph into an artist showcasing a sense of autonomy comparable to music’s modern powerhouses. When asked about how she compares to the artist she was when first entering the scene, she shows a sincere openness and simultaneous strength. “I’ve been through a lot in my personal life. When I first started releasing music in 2019, I was just wrapping up a very terrible relationship that I got into when I was quite young. When I came out of that relationship, I started a whole new batch of songs because I didn’t want to use any of the old ones anymore,” she laughs. “It just it didn’t seem relevant to what I was about to do anymore, you know? I was at the beginning of remaking myself. And it was a really great that I was able to do that at the front of releasing music because I’m still in a place where I’m able to be experimental.”

In an industry constantly looking for uniqueness, Tamera being a genre-bending heroine may be the very reason she takes over the music scene like wildfire. “I wouldn’t say that I’m in a genre yet, I still have room to play. I just use music as my therapy. As I grow as a human being, my music is going to come on that journey with me.” And there’s something so exciting about a singer who has yet to reach her full potential.

With only a few singles under her belt and millions of streams already amassed, the bounds are endless for Tamera. She’s perfectly faceted for success and sheer chart domination. The starlet is full of surprises, and that’s exactly what keeps us coming back for more. Lucky for us, she has one now: “I write rap music a lot! But obviously, I’ve not rapped in public, no one’s seen me rapping before. And there’s a little bit of that on the project.” 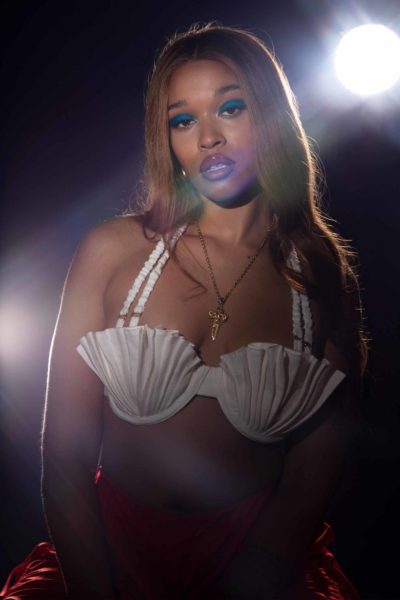 Finally taking her hypnotic sonic affairs to the stage, Tamera welcomes her debut solo live show on November 3rd. Predicting the future, it’ll likely be a special opportunity to see an intimate performance of an artist sure to be headlining arenas in just a matter of time. “I’m not going to be able to believe it until I’ve done it,” she says quickly as if counting down the moments. As her second live performance following an appearance at the sold-out Annie Mac show in March 2020, hitting the stage is where her ‘pinch me’ moments still manifest.

“It’s like the other side of being an artist,” she says. “When you go to a show, you can really connect to these people. If they listen to your music, they already feel like they have a connection with you. It’s a very intimate and warm, fuzzy feeling, you know?” We absolutely know, Tamera. Concerts allow an artist’s passion to radiate from stage to audience, and a Tamera song is nothing short of a heart-to-heart experience through and through.

Offering her favorite live music memory, she shares a night with her mother seeing none other than the queen herself: Beyoncé. In a nostalgic moment, the singer recalls how “Beyonce’s fierce ass pops up from the stage and me, I started blubbering like a baby, like I was crying. And it was the last thing that I was expecting to ever do, but the tears came out and I was just so overwhelmed! Once upon a time, I’d studied this woman and she was incredible to me. I think all those feelings just rushed back when I finally got to see her live. I’ll never forget it, but I was so embarrassed!”

My thoughts? Tamera will undoubtedly have an impact just the same.

Tamera’s debut EP Afrodite is out this Thursday 18th November.

Listen to Tamera's latest single below: 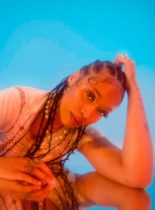