Signed to Nigeria’s leading record label, EMPIRE, Wande Coal is an emerging talent with a flair for modernizing today’s afrobeats scene. Working towards the release of EMPIRE’s brand-new compilation album ‘Where We Come From (Vol. 1)’ Wande’s latest single “Umbrella” is the first track released with an official music video.

Beginning his musical journey singing and playing the piano at church, Wande has since gone on to establish himself as an essential producer, songwriter and musician to watch. “Umbrella” is the second single release taken from EMPIRE’S new album and is a collaboratively written project by Wande, Sak Pase and Sean Kingston.

Speaking about his new release Wande says: ““Umbrella” is meant to celebrate love and how protective, special, and full of life it makes you feel”. Collaborating with video director Austin McCracken, Wande touches upon the visuals: “I like for my music to tell a story and paint a picture of what I’m going through and experiencing. When people listen to this, I want them to think of happier times with people they love to be around”.

Watch the official “Umbrella” video below: 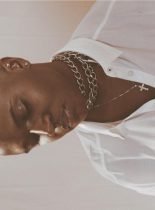 Refusing to bound her sensual voice, Amaarae teams up with Wande Coal on their groovy Afro-disco inspired track "Spend Some Time".